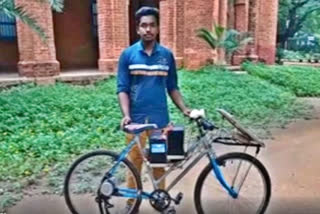 GUWAHATI July 10:  From the state that indian great scientist APJ Abdul Kalam belongs, a young guy have done an incredible creations, here’s about the story of a college student from Madurai in Tamil Nadu who designed a solar-powered electric cycle. His story has now reached people’s who are now sharing  all sorts of appreciation and motivative comments.

ANI took to Twitter to share about the student named Dhanush Kumar. ‘Madurai college student, Dhanush Kumar designs solar-powered electric cycle. The bicycle can run for up to 50 km continuously with the help of solar panels. A rider can travel more than a 20 kms after the full electric charges reduce to the downline,’ they wrote. They also shared some images of the student and his creativity creation design.

While replying to their own post, they shared a quote from the creator talking about the bicycle. ‘The cost and maintainance of electricity used for this battery is very low compared to the price of petrol. It costs ₹1.50 to travel up to 50 km. This bike can run at a speed of 30-40 km. This speed is enough to drive this bike inside a city like Madurai, says Dhanush Kumar,” reads the tweet.

Across India people shared all sorts of comments while reacting to the story shared on Twitter. ‘Hidden talent should be encouraged,’ wrote a Twitter user. ‘It should be commercialized. Good concept,’ shared another. ‘Amazing,’ expressed by audience’s.