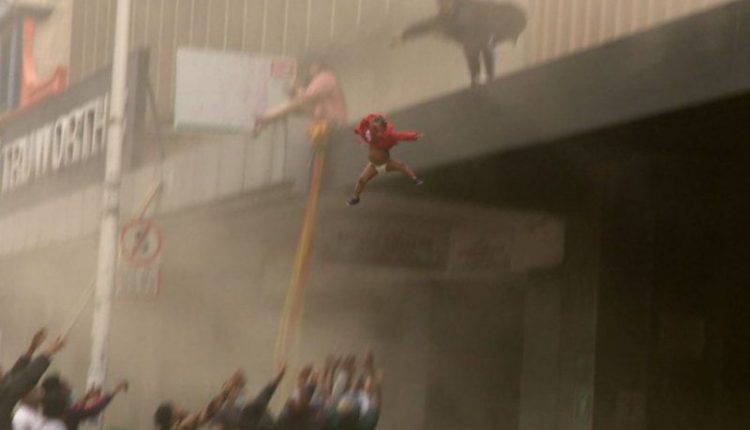 AN AFRICAN MOTHER THROWS HER BABY TO SAFE FROM BURNING

GUWAHATI July 15: In order to save her child, a mother threw her infant from a burning building in South Africa. The horrible dropping moment caught on camera, now the footage and images has left people around the world stunned. Fortunately, the baby was caught by passersby standing below and later was reunited.

The mother, Naledi Manyoni, was recorded by BBC cameraman Thuthuka Zondi throwing her daughter, Melokuhle, from a burning building in amid continuing riots in Durban. The terrifying clip showed the woman being confused by all the black smokes and commotion as she approaches the ledge of the high-rise building.

Have a look at the Footage share by ‘The Guardian’

Footage showed afew people rushing to the scene to help the perplexed mother assuring her to throw the 2-year-old child into their arms.

After throwing her daughter, the woman was seen holding her head in shock, as the good Samaritans caught the child

Manyoni recalled outside the building as her daughter sat on her shoulders. “She kept saying, ‘Mama you threw me down there.’ She was scared”,she told Reuters. They stood on the street before burned and pillage shops.

In consequence the people in South Africa have been killed and hundreds arrested in riots, following the jailing of former President Jacob Zuma last week for failing to appear for a corruption enquiry. The protests, which started in Zuma’s home province KwaZulu-Natal on Saturday, soon turned into mass looting,arson and rampage in provincial Durban and Johannesburg, the commercial hub of the African nation

The mother Manyoni later told The Guardian that she had no choice but to release her grip on her daughter and hope that she would be caught by people waiting below. ‘They kept screaming ‘throw her’,’ she said. Manyoni and her fiancé lived on the 16th floor of that building that was set on fire by looters at ground level amid the unrest in the country.

“All I could do was trust complete  on strangers,”the 26-year-old woman speaks to BBC News later. Recollecting the day’s ordeals, she said: ” the lift was not working because of the fire, so Manyoni frantically ran down the stairs with her baby”.

However, because of the fire she couldn’t reach the ground floor.

It was then when she ‘managed to squeeze through to a balcony area on the second floor’, where she resorted to faith in strangers to make sure her daughter lived. Group of Firefighters arrived at the scene about 20 minutes after passersby had started rescuing others residents with ladders, which is how the mother was reunited with her daughter.