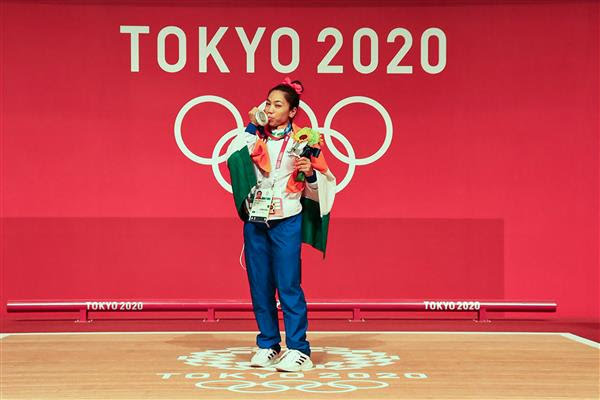 At least five athletes from Manipur, including Chanu, Devi and boxer Mary Kom, are representing the country at the ongoing Tokyo Olympics

GUWAHATI,july 26: After the news of winning SILVER medal in Tokyo Olympics 2020, in overjoyed Manipur Chief Minister N. Biren assured weightlifter Saikhom Mirabai Chanu that on her return the government will give her a job suitable to her as a token of gratitude.

Talking to her on Sunday through video conferencing, Mr. Biren said, “You no longer have to be a ticket checking inspector in the railways”. The weightlifter had been working as a tickets inspector in the Indian Railways. Ms. Chanu profusely thanked the Chief Minister for this kind gesture.

Mr. Biren said, “₹1 crore is set aside for you. You will get it on arrival in Imphal. Besides the plum job will be of an Additional superintendent of police in state police department” . Other government departments and prominent citizens including politicians have started announcing cash rewards for Ms. Chanu. On Sunday, Education Minister S. Rajen announced that his department will give ₹3 lakh to the weightlifter.

Thanking the Chief Minister and people for their unwavering support, Ms. Chanu said that she will soon return home and meet all her well-wishers.

Mr. Biren also exuded confidence that international boxer Mary Kom will surely win a gold medal. She had bagged six medals in different events. However, Mr. Biren did not promise any government job to her. She was appointed sometime back in the police department to the rank of superintendent of police. Meanwhile, Sushila Likmabam who had bowed out of the Judo bout in Tokyo said, “I am not disheartened by the defeat. I will work hard so that I do better in the next Olympics. I am happy that my friend Mirabai could open the medal account for India”.

Judoka L Sushila Devi will also be promoted from the rank of constable to sub-inspector, Singh said.