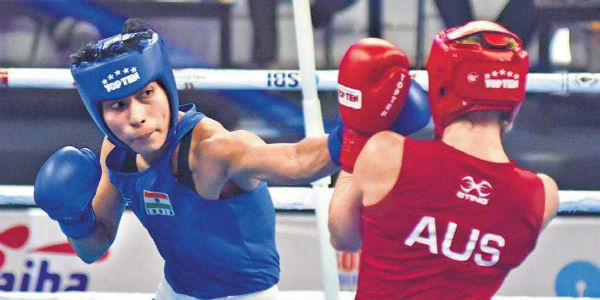 Lovlina Borgohain's Round of 16 match VS Germany's Nadine Apetz is scheduled for 2.27 pm local time or 10:57 am on Tuesday

TOKYO,July 27: Two-time World Championships bronze medalist Lovlina Borgohain will hope to join Mary Kom as the second Indian boxer to win a round at the Tokyo Olympics 2021 on Tuesday.

Lovlina punched her Tokyo ticket in 2020 when she finished with a bronze medal at the Asia and Oceania Boxing Olympic Qualifiers. It made her the first ever female boxer from Assam to qualify for the Olympics.

Lovlina Borgohain is going to steps into the ring against Germany’s Nadine Apetz at the Kokugikan Arena. Borgohain’s opponent has been a two-time World Championships bronze medalist just like her. The 35-year-old’s most recent achievement has been a bronze from the European Games in 2019.

Apetz, who is pursuing a doctorate in neuroscience, has created history as Germany’s first-ever women’s boxer to have qualified for the Olympics. A pathbreaker for German women’s boxing, Apetz has been an inspiration for many of her countrywomen. She will come into the bout against Lovlina with a deep desire to continue her journey in her first Olympics after having started her boxing stint at the age of 21.

But Lovlina too has established herself as India’s top female boxer in the welterweight category over the past few years. Inspired by Muhammad Ali, she made the switch from Muay Thai to boxing and has soared higher and higher since.

Lovlina Borgohain schedule
Lovlina Borgohain’s Round of 16 match VS Germany’s Nadine Apetz is scheduled for 2.27 pm local time or 10:57 am IST on Tuesday, July 27, 2021.

The bout will take place at the Kokugikan Arena in the first session of the day.