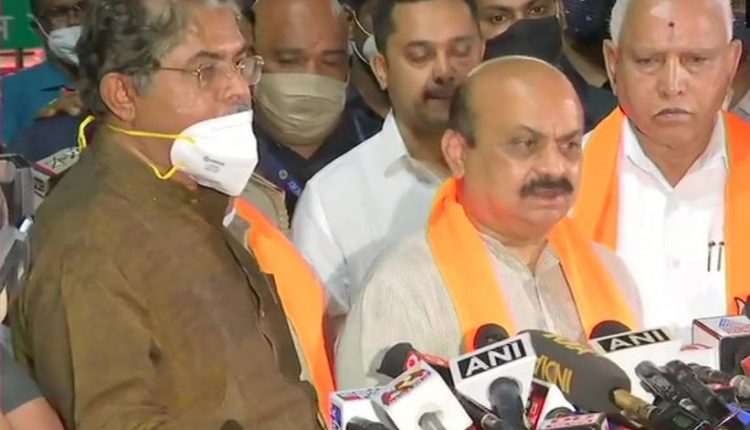 Basavaraj Bommai is confirm as a new Karnataka’s chief minister, will take oath at 11 am on Wednesday

The 61-year-old leader also said that he alone will take the oath of office on Wednesday.

BENGALURU, july 27: Newly confirm image of Karnataka ;Bommai an engeneer by profession who has started his career as a Tata group . Three consecutive term MLA Shiggaon in Haveri district.

Today the Bharatiya Janata Party’s (BJP) legislature party has elected Basavaraj S Bommai as the new chief minister of Karnataka. Earlier Basavaraj Bommai was served as the home minister in the BS Yediyurappa government and was among the top contenders for the chief minister’s post.

During the BJP’s legislature party meeting, Bommai’s name was proposed by BS Yediyurappa and seconded by Karjol Ashok Eshwarappa and all BJP Members of parliament.

Just like the outgoing Chief Minister BS Yediyurappa, who resigned on Monday, the new chief minister is also from the politically influential Lingayat community.

Basavaraj Bommai met Governor on Tuesday evening to stake claim to form government. He will take oath at 11 am at the Raj Bhawan.

Sources in the BJP said there is consensus on having three deputy chief ministers in the new government in Karnataka. The likely names are: R Ashoka (from Vokkaliga community), Govind Karjol (from the Scheduled Caste) and Sriramalu (from the Scheduled Tribes).

Of the 22 chief ministers in Karnataka so far, only three were able to serve their full term.

The outgoing Chief Minister, BS Yediyurappa, held the post for 1,901 days spread across four different tenures. On as many as nine occasions, chief ministers could not even complete a year in office.

Union minister Dharmendra Pradhan, who was one of the central observers sent by the BJP to Karnataka, congratulated Basavaraj Bommai in a series of tweets and said he was elected unanimously by the BJP MLAs.

“Heartiest congratulations to Shri BS Bommai on being elected as the new chief minister of Karnataka. A unanimous choice, he was elected as the leader of the legislative party of Karnataka BJP in the presence of Shri BS Yediyurappa, Arun Singh and other senior party functionaries,” he tweeted.

In another tweet he wrote, “One of the main architects of a first-ever BJP for India government in South India, Shri BS Yediyurappa leaves behind a lasting legacy. Compliments to him for prioritising the welfare of Karnataka. Wishing him the best in his endeavours to strengthen the party and serve the people of Karnataka.”

Who is the new chief Minister?

Basavaraj Bommai belongs to the Sadara Lingayat community. He is a close confidant of BS Yediyurappa and hails from the ‘janata pariwar’. His father SR Bommai also served as Karnataka’s chief minister.

Basavaraj Bommai joined the BJP in 2008 and has risen in the party ranks since then.

In the past, he held the portfolio of water resources.