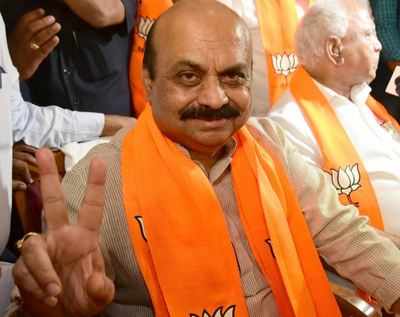 Bommai visited a temple ahead of the oath-taking. BJP supporters gathered outside Raj Bhavan ahead of Basavaraj Bommai’s oath-taking ceremony.

Bommai’s appointment is the second instance in the state’s politics for a father-son duo to have occupied the top post.

Soon after his election as the leader of the BJP legislature party, Bommai, along with caretaker Chief Minister B S Yediyurappa, drove to the Raj Bhavan to stake claim to form the government on Tuesday.

Ending months of hypothesizing  over his exit, Yediyurappa on Monday stepped down as the Chief Minister, coinciding with his government completing two years in office. The Governor had accepted Yediyurappa’s resignation and dissolved the Council of Ministers headed by him, with immediate effect, but had asked him to continue to function as Chief Minister till alternate arrangements were made.