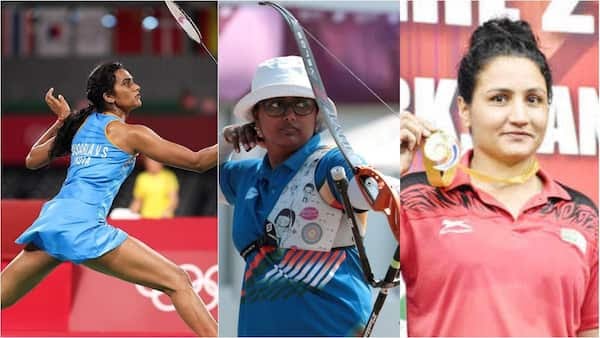 TOKYO, july 28: On the day 5 in Tokyo Olympics,Kento Momota (Japan) lost in a straight set against Heo Kwang-hee (South Korea). 21-15, 21-19 and is out of the Tokyo Olympics. Archer Deepika Kumari reaches the Round of 16 after a 6-4 win over USA’s Jennifer Mucino-Fernandez in the Round of 16 Eliminations. B Sai Praneeth’s Olympic campaign comes to an end with a 14-21, 14-21 loss to Mark Caljouw in his second group match. Pooja Rani wins 5-0 against her Algerian opponent to go through to the quarter-finals.

Archer Pravin Jadhav loses 6-0 to world champion Brady Elisson of USA in the Round of 16 Men’s Individual Elimination match after beating Galsan Bazarzhapov of 6-0 Russia in the Round of 32. Simone Biles pulled out of a second event at the Tokyo Olympics, withdrawing from the individual all-around competition to concentrate on her mental health. World no.6 PV Sindhu made short work of Ngan Li Cheung in the women’s singles group J match and defeated her 21-9, 21-16. The Indian will next face Japan’s Akane Yamaguchi in the pre-quarters. Not a great day for India in sailing — men’s skiff 49er — as Varun Thakkar and K Ganapathy end 18th, 17th and 19th in race two, three and four, respectively.

The next set of races will take place on Wednesday. Archer Tarundeep Rai defeated Oleksii Hunbin of Ukraine 6-4 but lost to Israel’s Itay Shanny 6-5 via shootout in the Round of 16 of the men’s individual event. In rowing, Arjun Lal Jat and Arvind Singh finished sixth out of 6 in their men’s lightweight double sculls semi-final failed to qualify for the medal round race. The women’s hockey lost 1-4 to Great Britain in their women’s Pool A match as Sharmila Devi scored the only goal for India. Deepika Kumari goes up against Bhutan’s Bhu Karma in the Women’s Individual 1/32 Elimination match. In Badminton, B Sai Praneeth faces M Caljouw of the Netherlands in the men’s singles Group D. Boxer Pooja Rani goes up against Ichrak Chaib of Algeria in women’s 75kg Round of 16 bout.

Deepika starts the set with a 9 while Jennifer hits an 8.

Deepika gets a 9 in the second shot, Jennifer hits an 8 again.

Deepika gets an 8 in the final shot while Jennifer gets a 9 and just misses on the Round of 16.

Deepika Kumari wins her 1/16 Eliminations with a 6-4 win over USA’s Jennfier Mucino-Fernandez.

Tokyo Olympics – Badminton
A disappointing campaign for Praneeth comes to an end after he loses in straight games. He loses 14-21, 14-21 and his Tokyo 2020 dream comes to end. Ordinary stuff here from the Indian after leading 7-1 in the second game.

Tokyo Olympics – Boxing
Pooja Rani wins a clinical bout against her Algerian opponent, with ease. The Indian is through to the quarter-finals now. She wins 5-0.

Rowers Arjun Lal Jat and Arvind Singh finished last in their men’s lightweight double sculls semi-final and do not qualify for the medal round.

Deepika disappointed in the first set as she registered a score of 25 while the opponent from the US scored 26 to take a 2-0 lead.

Tokyo 2020 Medal Tally Tokyo Olympics 2021 India contingent: List of Indian athletes, officials
In the second set, Deepika was able to make a comeback and hence she brought the scoreline level to 2-2. Continuing from where she left off, the Indian archer dominated the third set, and she went on to take a 4-2 lead in the match.

Deepika was not able to wrap up the match in Set 4 as Fernandez made a comeback, bringing the scoreline level at 4-4 and the match progressed to the fifth and deciding set.

However, in the deciding set, Deepika held her own to win the match 6-4, and as a result, she progressed to the 1/8 eliminations round.

Earlier in the day, Tarundeep Rai and Pravin Jadhav crashed out of men’s individual archery after losing in the 1/16 eliminations round.

India’s mixed team of Deepika Kumari and Pravin Jadhav on Saturday had lost their quarter-final clash of the Archery Mixed Team event. South Korea’s An San and Kim Je Deok defeated the Indian pair 6-2 in the quarterfinals.

India in Badminton on Day 5
Star Indian shuttler PV Sindhu defeated Hong Kong’s Ngan Yi Cheung in her second Group J match of the Tokyo Olympics 2021 today. Sindhu defeated Ngan Yi Cheung in straight sets 21-9, 21-16 to cruise into the elimination round of women’s singles. The 26-year-old Indian wasted no time in the first set and won it with ease. The first set (21-9) lasted for just 15 minutes. In the second set, Cheung as expected tried to pull the match away from Sindhu, but the Indian showed her guile and captured important points to clinch the win in straight sets. Sindhu has progressed into the knockout rounds. In men’s singles, Sai Praneeth failed to win his match and crashed out from Tokyo 2020 Summer Olympics.

India in Hockey on Day 5 of Olympics 2021
Meanwhile, Indian women’s hockey team suffered a third successive defeat as Great Britain won the encounter 4-1 on Day 5 of Tokyo 2020 Summer Olympic Games.
This is India’s third successive defeat after losing to Germany in their second match 0-2 on Monday. The Netherlands had thrashed India in their opening game on Sunday. India will now face Ireland (July 30, 2021), and South Africa (July 31, 2021) before the knockout stage, which begins on August 2. 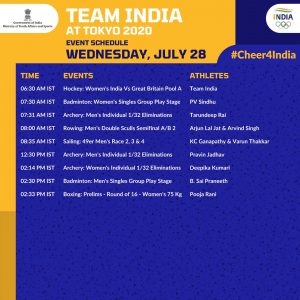