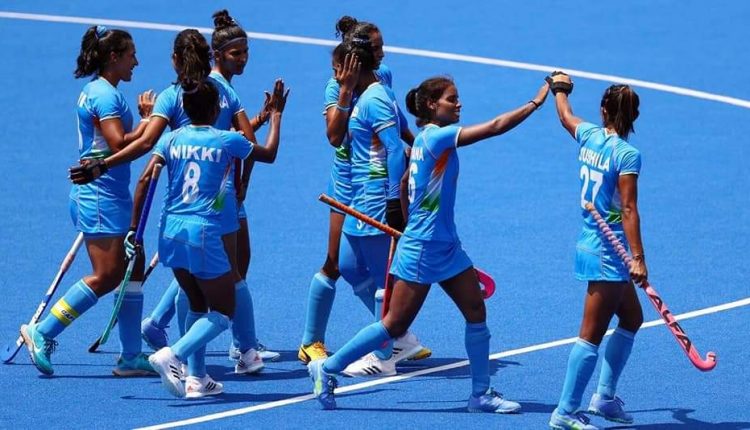 On Day 10 of Tokyo Olympics 2021, the Indian women’s hockey team scripted history today by qualifying for the Olympic Games semifinals for the first time, beating three-time champions Australia by a solitary goal. A day after the Indian men’s team entered the Olympic semifinals following a 49-year gap, the world no. 9 women’s side also entered the history books with a phenomenally gritty performance.
Coming into the match, the odds were totally against India as in world no.2 Australia, a mighty unbeaten opponent, awaited them in the last four round.

Tokyo Olympics 2021 India contingent: List of Indian athletes, officials
But the Indians, determined to prove a point, produced a strong and brave performance to eke out the narrow win over the Hockeyroos.
Drag-flicker Gurjit Kaur rose to the occasion when it mattered and converted India’s lone penalty corner in the 22nd minute to surprise the Australians.
India’s best performance in the Olympics came way back in the 1980 Moscow Games where they finished fourth out of six teams.
In that edition of the Games, women’s hockey made its debut in the Olympics and the sport was played in a round-robin format with top two teams qualifying for the final.
The Rani Rampal-led side will play Argentina in the semifinal on Wednesday.
India would be hoping a good performance from discus-thrower Kamalpreet Kaur, who was one of the two athletes to meet the automatic qualification mark [64.00m] and moved into the final ranked second in qualification.

India vs Australia in Women’s quarterfinal: 8:30am IST

India shooters their Olympics campaign without any medal
India’s ace shooters Aishwary Pratap Singh Tomar and Sanjeev Rajput failed to qualify for the medal event after finishing 21st and 32nd respectively in the men’s 50m Rifle 3 Positions, at the Asaka Shooting Range today.
Aishwary Pratap Singh Tomar amassed 1167 (63x) points at an average of 9.725 after shooting 120 shots on the target in three positions while compatriot Sanjeev Rajput gathered 1157 (55x) in the qualifications which in the end was just not good enough to make it to the top-8 players’ final. Russian Olympic Committee’s (ROC) Sergey Kamenskiy topped the qualification with 1183 (78x) points. China’s Changhong Zhang also scored 1183 points but with 67x that landed him on the second.
In the first position of the qualification event — Kneeling — Aishwary Pratap Singh Tomar got off to a flying start after he aimed 99 and 100 in the first two series. He proceeded with a good 98 and again a perfect 100. Meanwhile, veteran Sanjeev Rajput aimed 96 and a 99 in the first two series and followed it with a decent 95 and 97.
During the prone position series, Aishwary again enjoyed a good start with a 98 and a 99 in the first two series. The 20-year-old surprisingly didn’t land any perfect score in prone as he finished the position with two consecutive 97s which instantly landed him out of the top-15. Sanjeev improved massively in prone as he aimed 97, a perfect 100, and two consecutive 98s as he continued to stay outside of the top-20.
Pratap was unable to carry the momentum into the standing position round where he opened with a below-average score of 95. He improved it by a 96 but then dropped a very poor 93 in third. Aishwary finished with a decent 95 but till then it was just too late for the Indian shooter to gain any ground.
For 40-year-old Sanjeev, he failed to replicate the success of the previous round in standing position as he scored 94, 93, 95, and 95 and dropped outside of top-30 in the 39 players’ field.

Dutee Chand clocks 23.85 sec, finishes 38th out of 41 athletes in 200m
India’s top woman sprinter Dutee Chand failed to advance in 200 metres, finishing last in her heat at the Tokyo Olympics, clocking 23.85 seconds to ends seventh. Her personal best in 200m is 23.00 seconds, set at the 2018 Asian Games in Jakarta.
The 25-year-old Dutee was 38th out of 41 in the overall standings despite a season’s best time of 23.85.
Namibia’s Christine Mboma won the heats with a timing of 22.11 seconds, a new national record, while Gabrielle Thomas of the USA — the world-leading time holder for the season — was second in 22.20 seconds.
Niger’s Aminatou Seyni came in third with a timing of 22.72 seconds to seal the three automatic qualifying slots for the semi-finals.
The top three finishers from each heat along with the three fastest timings across the seven races make the semifinals, which will be held later on Monday. The final is scheduled for Tuesday.
Earlier, the Indian sprinter had bowed out of the 100m competition on the opening day of track & field competitions, clocking 11.54 seconds to finish seventh in her heat that also featured two-time Olympic champion Shelly-Ann Fraser-Pryce of Jamaica.
The world champion, however, was later pipped by her compatriot Elaine Thompson-Herah in the final for the gold medal. Shericka Jackson took the bronze medal in the women’s 100m to complete the all-Jamaican podium.
Social media came alive following Dutee’s 200m sprint, with few complimenting the runner for achieving her season’s best time, while others were critical of her performance.