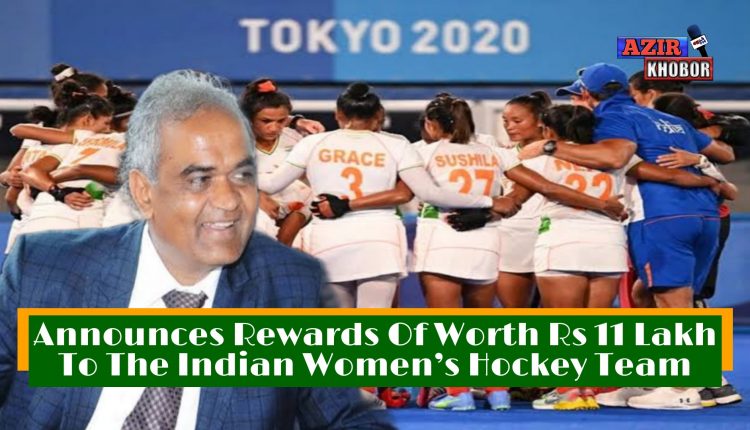 GUJARAT, Aug 04: Indian businessman,founder  and chairman of Hari Krishna group from Gujarat diamond baron Savji Dholakia on Tuesday announced that “the Hari Krishna Group will give a house or a new car worth Rs 11 lakh to those members of the Indian women’s Hockey team, playing at the Tokyo Olympics. Dholakia said it was an attempt at boosting the morale of the players. If the team brings home a medal, the group decided to award other members (who already have a house) with a ‘brand-new car worth Rs 5 lakhs”.

Our girls are scripting history with every move at Tokyo 2020. We’re into the semi-finals of the Olympics for the 1st time beating Australia,” the diamond baron wrote on Twitter.

”I was inspired by Mirabai Chanu and saw how women from our country are taking giant leaps. Chanu lives in a simple house but she won the medal. I want to make this announcement to award Rs 11 lakh for those who do not have a house and Rs five lakh to those who don’t have a car. I am making this announcement to boost the morale of our women’s hockey team members for the match today,” he wrote on Twitter.

With incredible pride in my heart, I take this opportunity to announce that HK Group has decided to honour our Women hockey team players. For each player who wishes to build her dream home, we will provide assistance of Rs 11 lakh.

India is playing its first-ever semi final in women’s hockey at the pinnacle of sports, after beating Australia 1-0 in the Olympics quarter final. The Indian Women’s hockey team will face Argentina in the semi-final match of Olympics 2020. The match is scheduled for Wednesday, August 4 at the Oi Hockey Stadium North Pitch, Tokyo, Japan. India sealed its spot in the semi-final after beating Australia by 1-0. Indian women’s hockey team produced a landmark moment on Monday at the Tokyo Olympics when they pulled off a huge upset with the 1-0 win over Australia. With the win, they made the semi-final of the Olympics for the first time. The team’s defence and goalkeeper Savita Punia stood tall to deny the mighty Australians as luck also went India’s way. A brilliant drag flick from Gurjit Kaur off a penalty corner in the second quarter ended up being the difference in the historic match.

Indians celebrated this ‘Chak De’ moment with huge fervour as Indian women continued to make the country proud in Tokyo. Post the win, midfielder Monika Malik said that the team knew they had to step up and this was a massive day for Indian hockey.