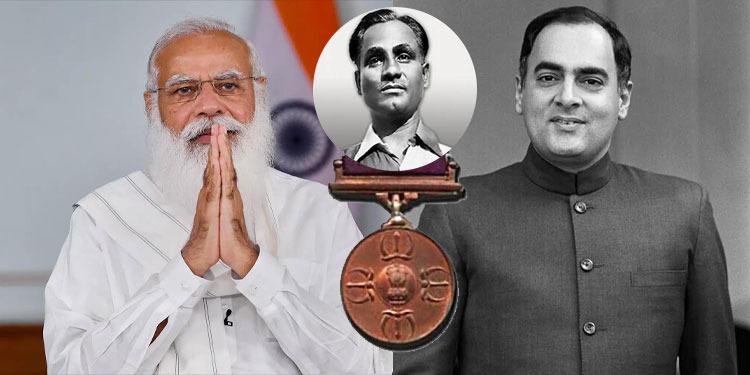 DELHI, Aug 06: The Rajib Gandhi Khel Ratna Award which is the Highest sports honour in India. which was for the first time established and awarded in the year 1991-92,the award had been given for the performance by a sportsperson in a year. A twelve-member committee evaluates the performances of a sportsperson at various International events like Olympic Games, Paralympic Games, Asian Games, and Commonwealth Games. The committee later submits their recommendations to the Union Minister of Youth Affairs and Sports for further approval.

In the Amid of  ‘Tokyo Summer Olympics’, On Friday PM Modi writes on his tweets that “He have been getting many requests from citizens across India to name Khel Ratna Award after Major Dyan Chand Khel Ratna Award.”

I have been getting many requests from citizens across India to name the Khel Ratna Award after Major Dhyan Chand. I thank them for their views.

The first recipient of the award was Chess Grandmaster Viswanathan Anand, who was honoured for the performance in the year 1991–92. In 2001, sport shooter Abhinav Bindra, then aged 18, became the youngest recipient of the award.[10] Usually conferred upon only one sportsperson in a year, a few exceptions have been made (1993–1994, 2002, 2009, 2012, and 2016–2020) when multiple recipients were awarded in a year. As of 2019, there have been forty-three recipients from fifteen sport disciplines: Athletics, Badminton, Billiards, Boxing, Chess, Cricket, Field hockey, Gymnastics, Shooting, Snooker, Table Tennis, Tennis, Wrestling, Weightlifting, and Yacht racing. The most recent recipients of the award are Rohit Sharma (Cricket), Mariyappan Thangavelu (Para Athletics), Manika Batra (Table Tennis), Vinesh Phogat (Wrestling), and Rani Rampal (Hockey).