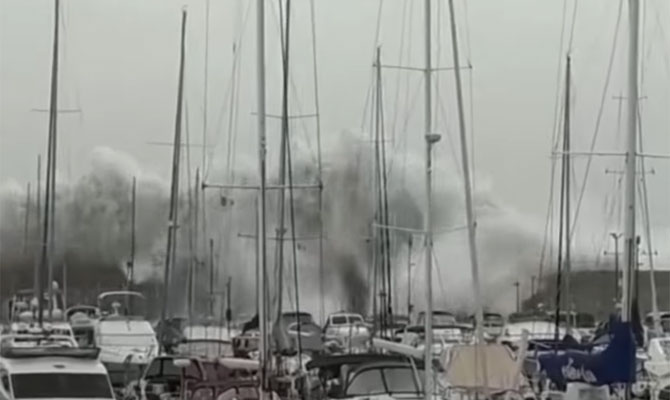 Typhoon scare on the closing day of Tokyo Olympics areas

Tokyo, Aug 08: On the ending day on Sunday at Tokyo Olympics which was started on 23 july, scare of Typhoon  situation prevailed in japan. A typhoon is expected to approach Tokyo and its neighboring areas in the morning on Sunday, the final day of the Tokyo Olympics, the weather agency said Saturday, warning of strong winds, high waves and heavy rain.

‘Typhoon Mirinae‘ was moving in the south of the Japanese archipelago in the Pacific at a speed of 25 kilometers per hour as of 9 p.m., the Japan Meteorological Agency said.

The typhoon was located at about 170 km south-southwest of Hachijo Island, part of the Izu island chain, located roughly 100 km south of Tokyo. It had an atmospheric pressure of 990 hectopascals at its center and was packing winds of up to 108 kph.

The typhoon will be located at about 190 km south of Choshi, Chiba Prefecture, at 9 a.m. Sunday, and will later move eastward, gradually heading away from Japan’s archipelago, according to the weather agency.

The name Mirinae has been used for two tropical cyclones in the western north Pacific Ocean. The name was contributed by South Korea and means the Milky Way in the Jeju language.