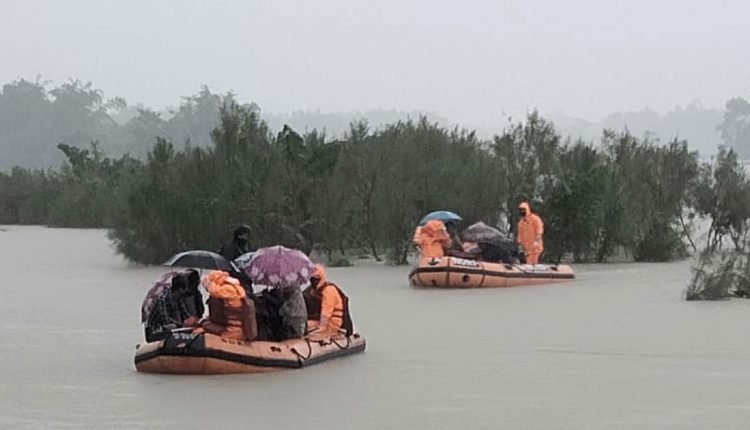 Over 21 Districts hits by flood in UP, Ganga, Yamuna Above Danger-Mark

Lucknow, Aug 09: At least 357 villages across 21 districts in Uttar Pradesh have been inundated with floodwater due to heavy rainfall in the state. Hamirpur and Jalun districts in Bundelkhand region are the worst affected. Chief Minister Yogi Adityanath will take an aerial survey of the flood-affected regions today to take stock of the situation.

Bundelkhand region, which usually reports below normal to normal rain, is the worst affected with Yamuna river flowing above the danger mark in at least five places.

In the Gonda district of eastern UP, A primary school got washed away due to rise in the water level of Ghaghara river on Sunday

#WATCH | A primary school got washed away following a rise in water level of Ghaghara river in Gonda, earlier today pic.twitter.com/6Jq7gPw0FZ

Ganga is flowing about the danger-mark in three districts – Badaun in western UP and Ghazipur and Balia in the eastern part of the state, officials said.

Ninety-seven villages or one-third of the total affected villages have been completely cut off due to the floods.

Due to the increase in the water levels of rivers, the Yogi Adityanath government has sounded an alert and asked all concerned officials to maintain a close vigil on the situation. The Chief Minister will is also expected to take an aerial survey of the affected regions later in the day.

Since the start of the monsoon on June 1, Uttar Pradesh witnessed 96 per cent rainfall which is a deficit of four per cent according to the government. The start government also said that more than half of the districts in the state have reported normal to above normal rainfall.

With inputs from NDTV

The post Ganga, Yamuna above danger-mark in UP first appeared on IPA Newspack.