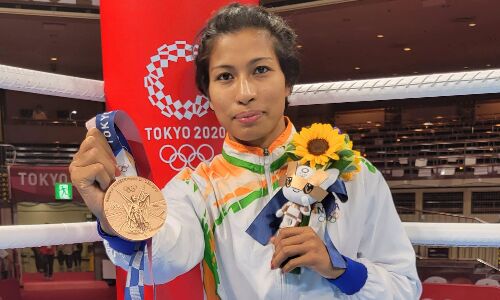 Tokyo Olympics: A bronze medalist ‘Lovlina Borgohain’ will be felicitate by government of Assam on her arrival

Guwahati, Aug 11:A 23-year-old boxer inhabitants of Assam Lovlina Borgohain , who has secured a ‘bronze medal’ in the 69kg women’s welterweight category in the boxing at the Tokyo Olympics, will be felicitated by the Assam government upon her arrival on August 12.

The Assam government has made all the arrangements to welcome the first Assamese Olympics medal winner pugilist.

According to the reports, Lovlina will reach at Lokapriya Gopinath Bordoloi International Airport, Borjhar at around 9 am on August 12.

The Assam government has organized a grand felicitation programme at the Srimanta Sankardev Kalakshetra on the same day in presence of several top dignitaries including Assam Chief Minister Himanta Biswa Sarma.

Jayanta Malla Baruah, political secretary to the Chief Minister said that the people of Assam are now eagerly waiting to welcome Lovlina Borgohain in her home land.

“Lovlina Borgohain is the pride of Assam. She will reach Guwahati on August 12 and the people of Assam will welcome her. The Assam government has organized a felicitation programme at Srimanta Sankardev Kalakshetra in Guwahati. The people of her native village are waiting to welcome her,” said Jayanta Malla Baruah.

Earlier, the Assam government announced a cash reward of Rs 50 lakh for the Olympics bronze medal winner under the Assam Sports Integrated Policy.

The 23-year-old from the tiny Baro Mukhia village of Assam’s Golaghat district became only the third Indian boxer to finish on the Olympic podium, joining two of the biggest icons in Indian boxing — six-time world champion M C Mary Kom and the very decorated Vijender Singh.

One of the top breeders in northeast India, symbiotic foods announced to supply free pork to boxer Lovlina Borgohain for the next five years.