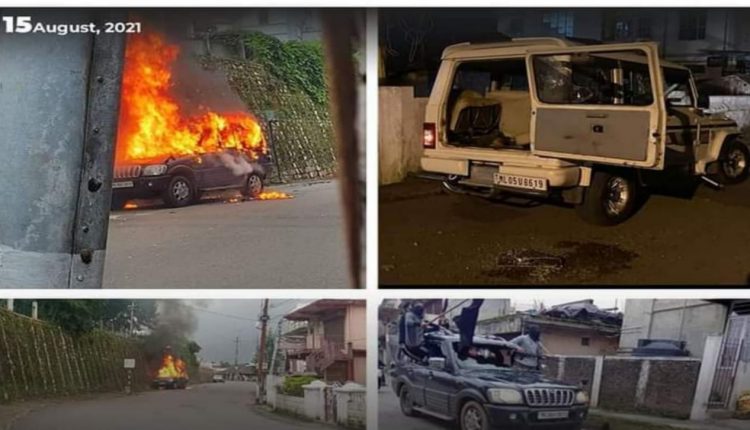 SHILLONG, Aug 15: On the 75th independence day celebration a massive violence broke out in Shillong after the encounter between police and miscreants, while carrying out bike rallies brandishing weapon’s, stone pelting against the cops in Jaiaw causing demages to the police vehicle’s and private properties.

After the incidents of unlawful activities being reported, the government of Meghalaya issued a notification announcing total curfew from 8 pm tonight in Shillong agglomeration.

And this order shall remain in force untill 5 a.m of 17 August or further depending on the situation.

Meghalaya Government even suspended ‘ Mobile internet’ and ‘SMS’ service for 48 hours in wake of incidents of vandalism and arson reported from parts of Shillong which may disturb public peace and tranquillity, and cause a threat to public safety and likely to create severe breakdown of law and order.

In his order C.V.D. Diengdoh, IAS, Secretary to the Government of Meghalaya, Home (Police) Department said, “….do hereby promulgate this notification under the provision of Section 5 (ii) of the Indian Telegraph Act, 1885, read with the Temporary Suspension of Telecom Services (Public Emergency or Public Safety) Rules, 2017 to prohibit the following types of media for the next 48 hours beginning from 8 pm on 15th August, 2021 in the 4 districts of Meghalaya namely, East Khasi Hills, West Khasi Hills, South West Khasi Hills and Ri-Bhoi Districts

The state Government suspends messaging system like SMS and Whatsapp and social media platforms like Facebook, Twitter and YouTube are likely to be used for transmission of information through pictures, videos and text and have the potential to cause serious breakdown of Law & Order.

This is done to prevent the misuse of the above mentioned media to disturb peace and tranquillity in the State of Meghalaya and for maintaining law and order.

Mobile Internet / Data services of all mobile service providers are warned that the violation of this promulgation will be punishable under section 188 IPC and also under the relevant provisions of the Indian Telegraph Act, 1885

G.P Singh, the special Director General of police (Assam) tweets the notification issued by the Meghalaya government also urged the people’s of Assam not to travel to Shillong till curfew continues.

Curfew has been imposed in Shillong due to Law & Order issues. People from Assam are advised not to travel to Shillong till curfew continues. @assampolice @mygovassam @GuwahatiPol @GhtyTrafficPol @DGPAssamPolice pic.twitter.com/j6lVn1Kd1k