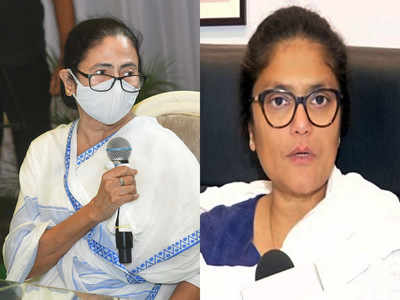 she was the partys top leader in Assam's Barak valley region dominated by Bengalis.

GUWAHATI, Aug 16: An indian politician and Congress leader Sushmita Dev has quit the party and sent her resignation letter to congress party chief Sonia Gandhi, sources said on Monday. As per the reports circulation says that she is going to join the party Trinamool Congress (TMC) of West Bengal Chief Minister Mamata Banerjee on Monday.

Sushmita Dev, a former MP from Assam, also she was a member of the 16th Lok Sabha from the constituency of Silchar. the Congress’ women’s wing – All India Mahila Congress – for long, offered no reason for her quitting the party.

In her letter to Gandhi on Sunday, Sushmita Dev said she was beginning a “new chapter in my life of public service”.

Sushmita Dev has also changed her Twitter bio to former member of the party and former chief of the Mahila Congress.

Sushmita Dev is the daughter of veteran Bengali Congress leader Santosh Mohan Dev and her mother is Bithika Dev, a former legislator of Silchar. Her father was a Member of Parliament and a Union Cabinet minister.

Reacting to the news of her resignation, veteran Congress leader Kapil Sibal tweeted: “Sushmita Dev Resigns from primary membership of our Party While young leaders leave we ‘oldies’ are blamed for our efforts to strengthen it The Party moves on with : Eyes Wide Shut.”

Meanwhile, speculation is rife that Dev now set to join the TMC as she is reportedly in Kolkata to meet with the party supremo Mamata Banerjee and her nephew Abhishek Banerjee. She is the now face of the Trinamool in Assam after joining TMC on 16 August on Monday.