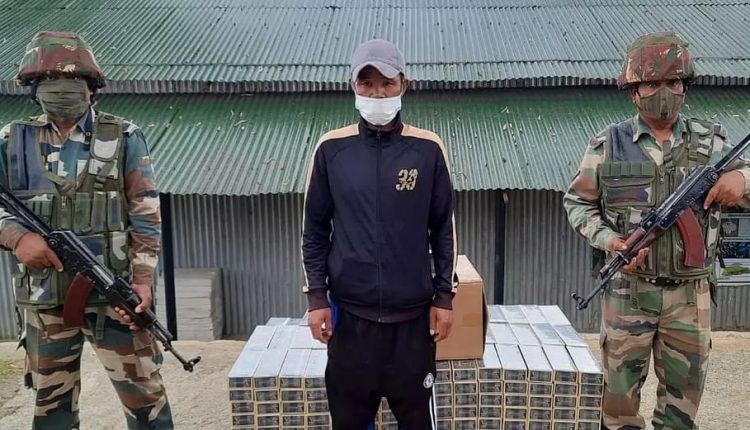 Sources said that 502 boxes of foreign origin cigarettes valued at Rs 6.53 crore were seized at Ruantlang and Kelkang-Khaungleng Road in Champhai district adjoining Myanmar in eastern Mizoram on Thursday. Three people were arrested till today.

The operation was jointly carried out by Assam Rifles and the Customs Preventive Force. In another raid, the Central paramilitary troopers along with Mizoram Police on Thursday recovered three pistols, 174 live rounds, three kg explosives, nine detonators and other such stores including Improvised Explosive Devices from a jungle at Hmawngbu village in Lawngtlai district adjoining Myanmar and Bangladesh borders.

Assam Rifles, in a statement, said that these recoveries are “huge setbacks for inimical elements”, who procured these arms and ammunition to undertake violent activities.

“Ongoing smuggling of drugs is a major cause of concern for the state of Mizoram , especially along the India-Myanmar border.

“Assam Rifles, as the ‘sentinels of Northeast’ have continued their efforts against the smuggling activities in Mizoram and other northeastern states,” the statement noted.

Assam Rifles Director General Lt Gen Pradeep Chandran Nair, while speaking at a virtual discussion, organized by industry body FICCI, earlier this week, had said that the force has seized smuggled goods worth over Rs 1,603 crore since last year in Mizoram and Manipur.

ASSOCHAM hosted AYURVEDA PARV supported by Ministry of AYUSH, Government of India, in…