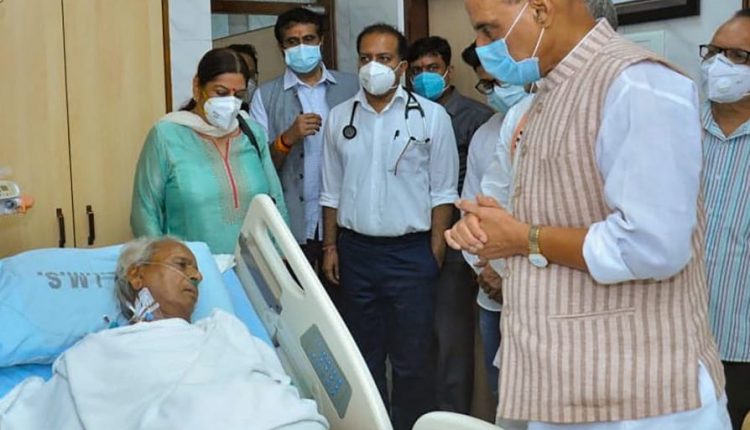 After a prolonged illness On Saturday the former Uttar Pradesh chief minister and former Rajasthan Governor Kalyan Singh passed away at Sanjay Gandhi Postgraduate Institute of Medical Sciences in Lucknow on Saturday, due to sepsis and multi-organ failure.

The veteran leader was admitted to the hospital’s intensive care unit on July 4 because of an infection and reduced consciousness level. On Friday, the hospital authorities informed that his health was critical and he was being moved on a life-saving support system.

BJP leaders, including Union home minister Amit Shah, defence minister Rajnath Singh visited the leader at the hospital this month. On Friday, UP chief minister Yogi Adityanath paid a visit to the leader.

Kalyan Singh, popularly known as ‘Babuji‘, became the chief minister of the state for the first time in 1991. He was at the helm of the affairs in the state when the Babri masjid was demolished in 1992. In several interviews, he recounted what happened on December 6 and just before the bhumi pujan of the Ram temple in Ayodhya in August 2020, he said he wanted to be reborn in the temple town. “I was told that central forces were on way to the temple town but their movement was halted by kar sewaks outside Saket college. I was asked whether to order firing (on kar sewaks) or not. I denied permission in writing and said in my order, which is still there on the files, that firing would lead to the loss of many lives, chaos and law and order issues across the country,” Kalyan Singh had told Hindustan Times in an interview.

In the  year 2004, he returned back to the BJP and again exited the party in 2009. In the 2009 Lok Sabha elections, he won from Etah as an independent candidate. In 2010, he announced the formation of the Jan Kranti Party and four years later, he again came back to the BJP. In the same year, he was appointed the Governor of Rajasthan and completed his term in 2019.