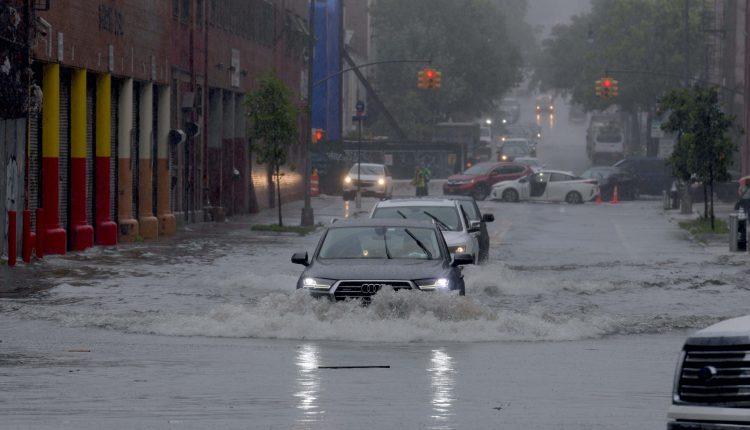 Different places of New York City is witnessing floods,power cuts and heavy rains with wind gust of 45mph additionally more than 6 inches of rainfall possibility in next 24 hours.

Suffolk County is under a hurricane warning, and New York City and Nassau County are under a tropical storm warning for the indirect impacts of Henri — namely heavy rain (3 to 6 inches possible across the region between Saturday night and Monday morning), strong winds and a potential for storm surge for shorelines along the Long Island Sound in northern Queens and the Bronx.

the National Weather Service was tracking the storm as it passed over Block Island, Rhode Island, and was expected to make landfall on Rhode Island by early afternoon.

It is anticipated to bring gusts of up to 70-mile-per-hour winds, as well as storm surges of up to five feet on parts of Long Island.

Perhaps most seriously, regions in the Hudson Valley New York, Connecticut and Massachusetts could see rainfall of up to five inches, with a chance for the storm to slow and linger, and increasing the likelihood of serious flooding, New York Government. Andrew Cuomo announced during a Sunday morning press conference.

Already more than 1,000 flights had been cancelled at airports in New York, Massachusetts and New Jersey due to the storm, with more expected throughout the day.

Strong winds had already begun lashing the region as Rhode Island and eastern Long Island saw gusts of up to 63 miles per hour and 56 miles per hour respectively, according to the National Hurricane Center.

Despite it weakening below hurricane strength, the National Weather Service warned that the threats posed by the storm – particularly heavy rain – remained the same.

The first thunderstorms fed by moisture from Henri brought up to half a foot of rain late Saturday, and flooding began in some areas overnight.

It marked the wettest hour the city had ever seen on record.

With the center of Henri projected to pass over or just off the eastern tip of Long Island by midday, storm warnings extended from coastal Connecticut and near the old whaling port of New Bedford, Massachusetts, to across the luxurious oceanfront estates of New York´s Hamptons, to the summer getaway of Fire Island.

‘Henri has weakened slightly and is now below hurricane strength,’ the agency tweeted Sunday morning.

‘This does NOT CHANGE the overall threats, especially the heavy rain threat.’

Some 55 million people are under storm warnings ahead of the arrival of Henri, and the National Hurricane Center warned that winds that could reach 80 mph.

Eversource, who provide power to 1.2 million customers in Connecticut, warned that between 50% and 69% their customers could lose power for between eight and 21 days, NBC reports.

Tropical storm-intensity winds began striking the coast at around 8am.

People in the projected path spent Saturday scrambling to stock up on groceries and gasoline. Some gas stations from Cape Cod to Long Island sold out of fuel.

Those close to the coast boarded up windows and, in some cases, evacuated.

Officials in Massachusetts, Connecticut and New York cautioned that people could lose power for days.

Authorities advised people to secure their boats, fuel up their vehicles and stock up on canned goods.