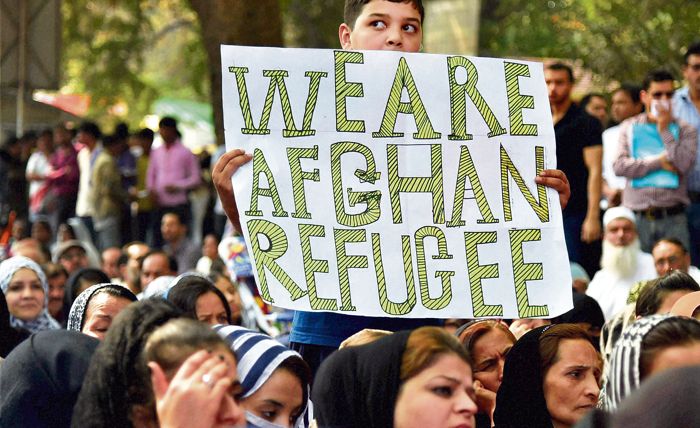 NEW DELHI, August,25: At the celebration of independence day in india, On August 15, when her native city Kabul fell to the Taliban, 19-year-old Mariam Arzo Nooyar was crying at her house in south Delhi’s Bhogal, saying all hope of redemption for her war-torn Afghanistan was replaced by night terrors.

Nooyar, an Afghan refugee, along with her family had moved to India seven years ago in hope of a safer and prosperous future

India is our home now and every year August 15 is the day of festivities in the country to mark its Independence Day. But this August 15, when India was celebrating its 75th Independence Day, wherein we lost our, as Kabul fell to the Taliban that very day. I was depressed and sad, and cried the whole day in my room,” she said with a heaviness in her voice.

She was among the hundreds of Afghan refugees, mostly youths, who gathered and vociferously protested in front of the UNHCR office here amid deepening crisis in Afghanistan in the wake of takeover of the strife-torn nation by the Taliban.

“The Taliban claim to do their acts in the name of Islam. But killing innocent people and curbing rights of women, is it Islam? Today, the Taliban people are hunting those who worked for the US when it occupied Afghanistan and government officials, musicians, artists, journalists. I have no hope left for my Afghanistan,” Nooyar said.

Wearing a traditional scarf with the national colours of Afghanistan, she and her friend Kayenat Yusufi, 18, sit in a corner of a streetside near the UN Refugee Agency office in Vasant Vihar, to take a rest.

Yusufi, a class 12 student, points to her pair of black denim which she has paired with her traditional dress on top, accessorised with an Afghani scarf.

“In Afghanistan right now, I cannot even think of wearing this outfit. The Taliban men will beat me with sticks or rods and even shoot at me. I shudder to think what our fellow women and girls are undergoing in Afghanistan,” she lamented.

Yusufi and Nooyar shouted slogans during the protest as they are both volunteers of the Afghan Solidarity Committee, an umbrella organisation of Afghan refugees in India, which led the demonstration.

PTI spoke to a large number of female protesters, who hail from different parts of Afghanistan, and had moved to India in the past few years or over a decade ago.

Tamanna,10, came to the protest site along with her mother, Hasala Rahmoni, from an Afghan refugees enclave in Noida.

She held up a placard with a solidarity message that read ‘please provide practical support to asylum seekers and refugees’.

The young girl aspires to become a doctor, but the recent turn of events in her homeland has broken her heart and left her mother, who was a teacher of Afghan Dari (Persian) language in Afghanistan before migrating to India a few years ago, in a state of depression.

“The Taliban, they kill people and don’t allow girls to go to school or women to venture out,” the 10-year-old rued.

“My relatives are there in Afghanistan. I am worried about them and women and girls in general. How can we be happy in India, if our Afghanistan and Afghani people live in fear and uncertainty,” her mother, Rahmoni said.

Asked if they would ever like to return to their homeland, both mother and daughter said, “No, never. With the Taliban in control now, we can’t even think of returning. It’s hell right now.”

Among women protesters were also people who have lived in India for over a decade now.

Zaalasht Akhtari, a resident of Lajpat Nagar, had moved to India 13 years ago.

At Delhi’s ‘Little Kabul’, she lives with her parents, three sisters and a brother.

“I worked in the marketing department in the health sector. But, after the Taliban took over, the entire medical tourism flow from Afghanistan has stopped. Fate of women there, the less said the better. The Taliban, appeasing women to just form a government. They are evil, they will return to their old self,” Akhtari said.

Farkhunda Hami, 22, a fashion designing student, and her friend Alnuss Sada, 19, who also sat through the protest, were dejected thinking of the fate of the women and young girls back in Afghanistan.

Amid evaporating hopes and feelings of fear and frustration, many young girls walked around the protest site, wrapped in the Afghan national flag, seeking to inject a sense of optimism amid a sea of pessimism.

Being aware of the current situation, best friends Sadaf Kargar, 14, and Beheshta Niyazi, 13, who hail from Mazhar-e-Sharif and Kabul respectively, and now live as refugees in Tilak Nagar, expressed no desire to return to their native country ever, but demanded more support from the Indian government and the UNHCR.

“I can at least walk freely with my country’s flag in the streets of India. In Afghanistan, the Taliban will kill me if I even show my flag,” Niyazi lamented.