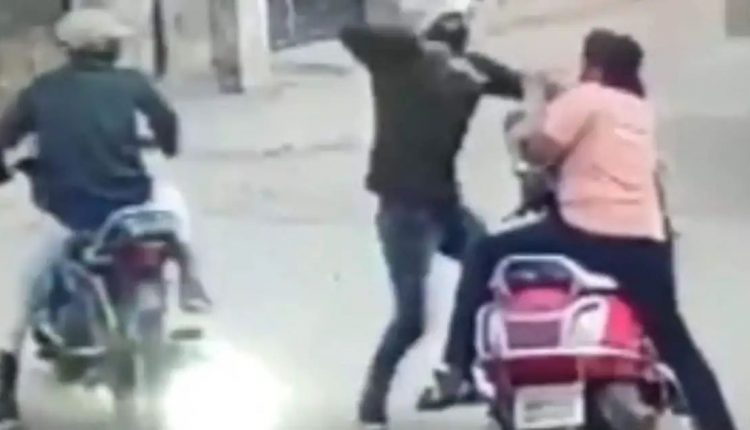 Bike robbers snatch chain from a woman in daytime in MP

In Madhya Pradesh during daylight in a brazen act of lawlessness, a pair of bike-borne miscreants were captured on video snatching a woman’s gold chain at Gwalior. The viral images have sparked off conversations around safety and the how laws need to be more stringent so that miscreants are deterred from going after unsuspecting civilians in broad daylight.

The video was captured on CCTV camera and later went viral after it was shared by news agency ANI.

The video starts with two miscreants on a bike. The pillion rider is seemingly getting down when he sees a woman riding a scooter with her another person siting behind her. The man just grabs at the woman’s chain she is wearing and she loses her balance on the two-wheeler and has to halt. The man is seeing scuffling as the woman and her son seem to fight him off but he immediately brings out a gun and threatens the woman and the boy behind her who then let go off the chain. After this, he is seen calmly walking away.

The audacious robbery has left netizens shocked and some even pointed out how no one came to help the woman. A milk van which was coming from the opposite side also stops but does not intervene.

Vivek Asthana, Town Inspector, Padav police station, Gwalior said, ‘The woman was on her way to drop her son at the tuitions when two unknown persons snatched her chain. We have CCTV footage & will arrest them soon.”

Yet another similar incident recently had a more satisfying end. A thief was fed laxative and bananas by a doctor in Bengaluru to make him excrete a gold chain he had swallowed to escape from the police. On Saturday night, the chain-snatcher had snatched a gold chain from a woman named Hema at MT street of Central Bengaluru. He had tried to run away but locals caught him and ebat him up, upon which police intervnened and took him to the hospital before arresting him. There an X-ray revealed that he had a gold chain

that he had swallowed.

All the Banks to be remain closed for 12 days; Check all the details list here