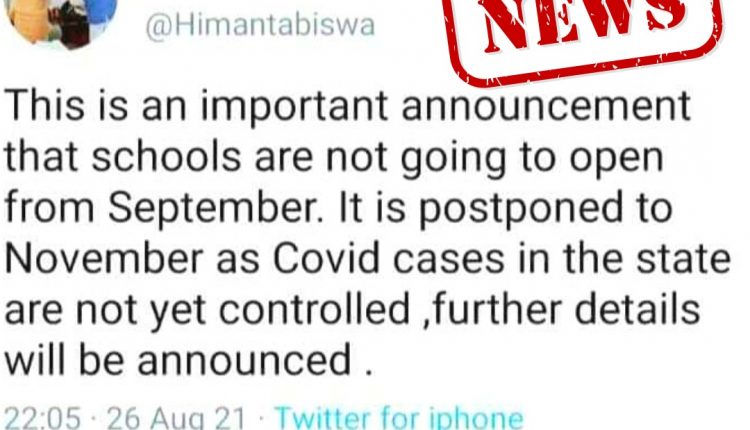 GUWAHATI, August 28: Due to the surge of covid-19 cases in Assam all the schools,colleges and other educational institutions had been shut from long time, in order to break the covid-19 chain.But as the covid-19 cases are declining in the state the government is planning to open  schools from the month of September, however after the fake news being reported,the Chief Minister of Assam Dr.Himanta Biswa Sarma on Saturday reveals that “Fake news announcement  is being reported from his tweeter account about the non-opening of schools from the month of September is largely circulating on whatsapp.“

Dr. Sarma sharing the screen shot on tweeter claims that it is a Fake message and one should not given heed to.

A fake announcement, purportedly issued from my Twitter account, about non opening of schools is being circulated on WhatsApp.

This is a fake message and should not be given heed to.@assampolice please file an FIR.#FakeNews pic.twitter.com/2asKBXtGxV

After the Dr. Sarma direction given to the Assam police to loadge an FIR, in response Assam police has taken up the case by ‘Crime Branch‘.