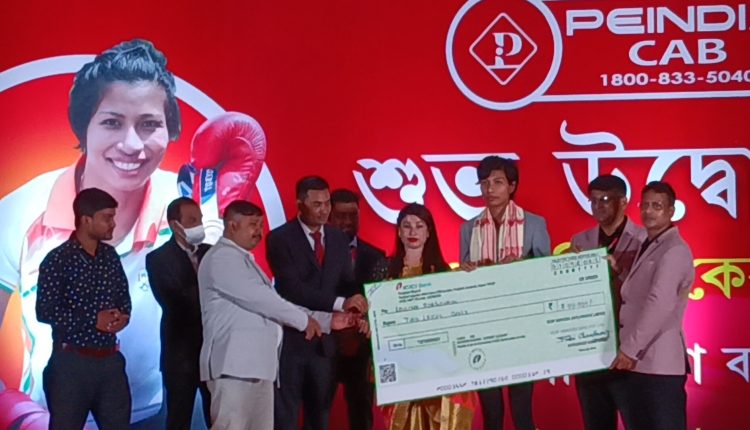 GUWAHATI, Sep 01: Since from her return to India from Tokyo Olympics, Bronze madelist Lovlina Borgohain is recieving rains of Honor, respect and rewards from government of Assam to corporate sectors. On 1st September ‘Peindia Cab services‘ of Guwahati has organised a felicitation and inauguration ceremony at Hotel Taj vivanta.

The lightings ceremony was perform by Bronze medalist Lovlina accompanied by  Cultural dance of Assamese, in the ceremony Lovlina Borgohain is invited as a chief guest, along with chief Managing director of ‘Prag News‘ Sanjive Narain, DA News plus Editor in chief Pranay Bordoloi.

At present more than 6,000 drivers have signed and merge to ‘PEINDIA CAB‘ Services’ out of 16,000 drivers working in OLA and UBER in Guwahati itself.

The President of Cab service of Guwahati while addressing the media said ”safety of women will be ensured and if any drivers misbehave with women’s actions will be taken intensively against such driver’s,”He added.

Lovlina Borgohain was also earlier on the same day on  Wednesday felicitates with Cheque rewards of Rs.50 lakhs rupees by ‘Numaligarh Refinery Limited’ and ‘Oil India corporation limited’ together at Hotel Novotel.

Heavy Storm on Earth may cause tear down ‘internet meltdown’