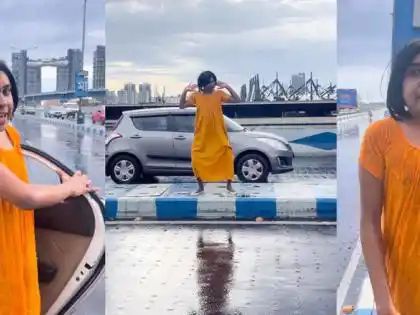 Sandy Saha, a Bengali influencer, found herself on the wrong side of the traffic rules, after she was fined by the Kolkata Police for dancing on the flyover.

Sandy shared the video on his official Facebook page. In a 3 minute 38-second video, we see a car parked on the flyover, Sandy walks out and goes to the opposite side, and begins dancing to the song “Main aai hun UP Bihar lutne,” from the movie Shool. The caption of the video read, “I hurriedly visited Uttar Pradesh.”

The video soon went viral, but few of the viewers tagged the Kolkata police department in the comments to alert them to the situation as Maa flyover is considered extremely dangerous for this type of action.In response to the complaints, Sandy received a penalty notice. The cab driver and owner of Sandy’s cab have both been charged by the Tiljala traffic guard for stopping the car on the flyover. Meanwhile, Sandy claimed that he was unaware that stopping automobiles on the flyover was prohibited. Sandy has a huge social media following, with 1.4 million Facebook fans and 422k YouTube subscribers.

Shocking incident: An angry student attacked his male teacher with an iron rod while attending lecture in Delhi