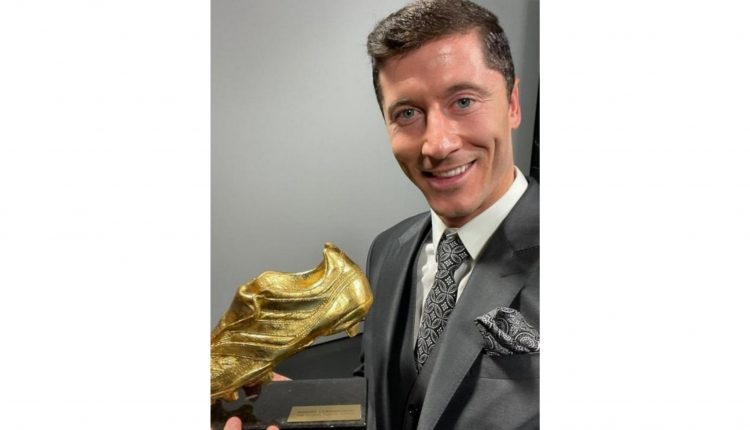 Lewandowski was in tremendous form last season and scored 41 league goals to surpass Gerd Muller’s tally of most goals in a single Bundesliga season. It’s the first time when Lewandowski has able to clinch the European ‘Golden Shoe‘ which was won by Ciro Immobile last season.

Messi, who has won the European Golden shoe for a record six-time, was the second on the tally after Lewandowski in the 2020/21 season with 30 goals for FC Barcelona. Meanwhile, Portuguese star Cristiano Ronaldo finished third on the list with 29 goals for Juventus.

Both Messi and Ronaldo have changed their clubs this season and joined Paris Saint-Germain and Manchester United respectively. While Lewandowski remained at Bayern Munich despite several rumours regarding his transfer in the summer window.

The Poland striker was in sensational form and averaged 1.50 goals per 90 minutes over the course of Bayern’s ninth-successive-Bundesliga-winning season.

I would like to thank my family, team mates, coaches and the entire @FCBayern team🙏I am extremely proud of what we have achieved together as a team. Thank you! #GoldenShoe2021 pic.twitter.com/UzECuxSd03

After claiming his maiden European Golden Shoe, Lewandowski said he don’t have to prove himself in another league.

“I don’t have to prove myself in another league,” said Lewandowski. “I can compete with the best from other leagues in the Champions League.

“I am 100 per cent focused on Bayern Munich, I don’t think about anything else but my team.”

The 34-year-old further said age is just a number as he calls himself a good wine and hope to get better.

“I am still here – and I will be here for a long time!” said Lewandowski.

“Age, these are just numbers. I feel very good, I have the best stats I’ve ever had. I know that with my body I can play at the top level for years to come. I’m like a good wine and I hope to get even better,” he added.

SC orders to give compensation of Rs.50,000 to COVID-19 victim’s families