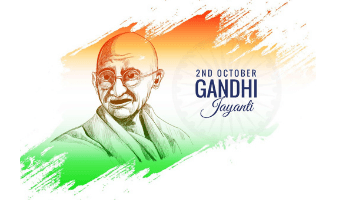 Gandhi jayanti 2021: Remembering Father of nation on his birth anniversary

New Delhi,Oct 02: In India every-year in October 2 is observe’s to commemorated as the Gandhi Jayanti to mark the birth anniversary of Mohandas Karamchand Gandhi who is famously known as Mahatma Gandhi throughout the world.

The man, who was instrumental in India’s gaining independence, was born on October 2, 1869, in Porbandar, Gujarat, and got married at the very young age of 13 years to Kasturba

Mohandas and Kasturba lost their first child and that is considered to be one of the main reasons why Gandhi firmly against child marriages in India.

Gandhi who apparently paved the way to peaceful protest: NOT apparent Gandhi, who is today synonymous with peaceful protest, never won a Nobel Peace Prize despite being nominated for 5 times. And in the year 2006, the committee for the Nobel prize publicly admitted its regret for never honoring him with the award.

The year 2021 marks the 152nd birth anniversary of the Father of the Nation whose chief weapon in the fight for independence was non-violence.

Gandhi immortalised himself with his ideology of non-violence and peace and became relevant to all societies, religions, countries, and generations.

He still continues to inspire world’s leaders to follow the path of truth, peace, and non-violence. even while they are protesting against the state and demanding their rights. Aung San Suu Kyi, Nelson Mandela and Dalai Lama are some of the contemporary leaders whose political movements were largely influenced by Gandhis non-violent approach.