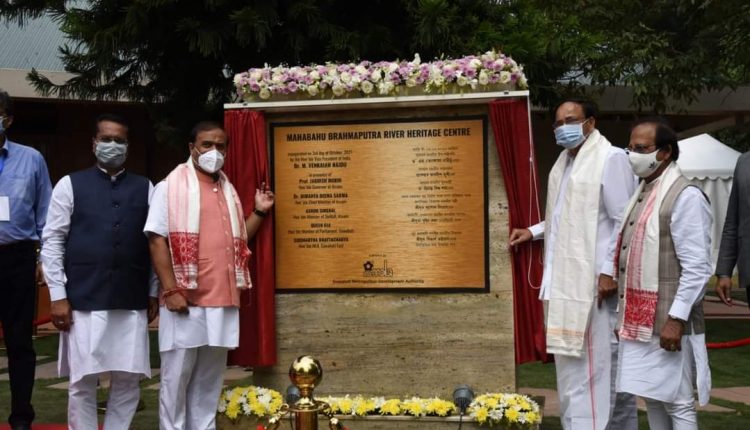 GUWAHATI,Oct 03:  India’s Vice President M Venkaiah Naidu on Sunday called for a powerful national campaign on the need to refresh the country’s rivers, saying it has to be done with top priority.

Noting that rivers have always been revered in India for their life-regenerating power, he pointed out that growing urbanisation and industrialisation have led to pollution of rivers and other water bodies in different parts of the country.

“In the past, our villages and cities used to be dotted with several water bodies. In the quest for modernisation, man, driven by greed, has destroyed natural ecosystems and at several places, the water bodies have virtually disappeared or have been encroached upon,” he observed.

The vice president, who arrived Guwahati on Sunday on a tour of the Northeast, began his trip by inaugurating the Heritage-cum-Cultural Centre on the banks of the river Brahmaputra

He also visited the museum at the centre and released a coffee-table book ‘Forever Guwahati’ on the occasion, an official statement issued by the Vice President Secretariat said.

Later in a Facebook post, Naidu described his experience of visiting Assam and the river Brahmaputra as unforgettable.

He wrote that he was awestruck by the natural beauty of the Brahmaputra, viewed from a splendid riverside garden. “I will cherish this memory for a long time.”

The vice president noted that the great river, providing livelihood to millions of people, is an integral part of the region’s culture and history.

Naidu suggested to the Centre and the state governments to include lessons on the importance of water conservation in school curricula. He also suggested that schools should conduct nature camps for students from a young age so that children, especially those living in the urban areas, see and enjoy the splendour of nature.

During the visit, Naidu witnessed several sections of the centre like the art gallery, the central hall with the theme ‘Life Along the River’ and ‘Majuli Corner‘, containing famed masks, panel paintings and other artifacts.
He appreciated the fact that the heritage campus is pedestrian only and vehicular traffic has been prohibited to maintain the serenity of the place. He suggested other heritage centres around the country too should adopt such green and healthy practices, by creating walking and cycling paths for visitors to explore.
“While bringing tertiary care to rural areas, it is imperative that we strengthen our primary healthcare system for better health outcomes.” He also lauded the government’s flagship Ayushman Bharat scheme and said it has brought ‘health assurance’ to millions of poor families.
Expressing concern over the disturbing trend of increasing non-communicable diseases in India, Naidu called for creating greater awareness among people on lifestyle diseases. He urged health experts and cultural icons to take the lead in this regard.

Bollywood: Shahrukh Khan’s son Aryan Khan has been placed under arrest by the Narcotics Control Bureau along with 2 others