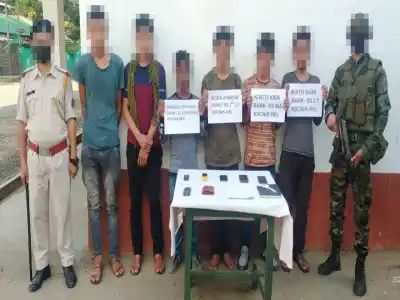 GUWAHATI/KOHIMA: In between the ongoing talks with Centre and Naga outfits in Delhi, five cadres of the different factions of the NSCN have been arrested in Nagaland and Assam with arms and ammunition and two hostages freed, defence officials said on Thursday.

A defence spokesman said that the security forces, in a joint operation with police arrested four cadres of the National Socialist Council of Nagaland-Niki Sumi group from Daba Gaon in Nagaland’s Dimapur district.

Two people, kidnapped by these cadres from Mishikito, were also rescued and various incriminating documents were recovered from the militants.

The spokesman said that in another joint operation by the army and police, an active member of the NSCN-Isak-Muivah was apprehended near Tinkopani Reserve Forest in Assam’s Tinsukia district, and a 7.65 mm pistol with three rounds, one safety fuse, one detonator and 250 gm explosive recovered from him.

All the five apprehended NSCN militants have been handed over to the police.