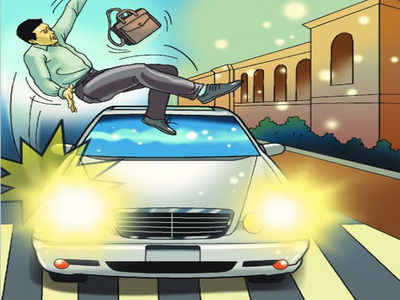 CHENNAI: On Monday night,a sub-inspector of 27-year-old police was fatally killed by two vehicles on the Kamarajar Salai near the State police headquarters.

The deceased was identified as T Prasanna, from Koliyanur village in Villupuram.

“On Monday while he tried to cross the road from the forensic lab entrance to go to Marina beach after duty. An SUV coming from Anna Square knocked him down,” said a police officer. Subsequently, another minivan coming from Mandaveli ran over him, said sources. He was immediately rushed to the Government Royapettah Hospital, but was declared dead on arrival.

The Anna Square Traffic Investigation Police has registered a case, and arrested car driver Rajkumar, 41 from Vadapalani and van driver Karthik, 33, for rash driving and causing death due to negligence and their vehicles were also seized and lodged an FIR under section 279.

Prasanna was a direct recruit and had been posted at the technical services wing in the DGP office, said the police. An engineering graduate, he was attached with the ‘police repeater centre’ in Vandalur. On Tuesday afternoon, Director General of Police, C Sylendra Babu and other police officers paid homage to the deceased Sub Inspector.