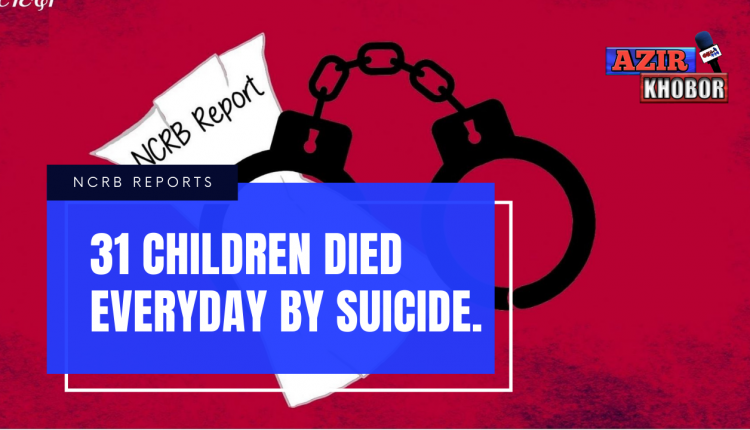 India lost more people to suicide than to Coronavirus in 2020: 31 children died everyday by suicide.

During this pathetic scenario of covid -19, India reported over 1.53 lakh suicides. This number is highest in last 10 years. The National Crime Record Bureau’s recent reports are showing shocking numbers of increasing suicide cases. While illness was the most attributed cause behind suicide, daily wage workers made up the largest share of total suicides, shows NCRB data. A total of 37,666 daily wage workers died by suicide in 2020 accounting for one-fourth of total suicides.

The data mentions “family problems” as one of the main causes of these suicides attributing 4,006 deaths to it, followed by “love affair” (1,337) and illness (1,327). Other reasons behind suicide by children, as mentioned in the data, include ideological causes or hero-worshipping, unemployment, bankruptcy, impotency or infertility and drug abuse. According to NCRB records, among total women who died by suicide, 50 per cent (or 22,372) were homemakers. This number accounted for close to 15 percent of total suicides. At least 12,526 students died by suicide accounting for over 8 per cent of total deaths, and 10,677 people engaged in the farming sector also ended their own life, the NCRB data shows.

During the time of pandemic many of them have been through hostile environment at home, many others have seen demise of their loved ones and have faced the impact of fear of contagion and deepening financial crisis at the family level, — said Priti Mahara, Director, Policy Research and Advocacy at “CRY-Child Rights and You” .