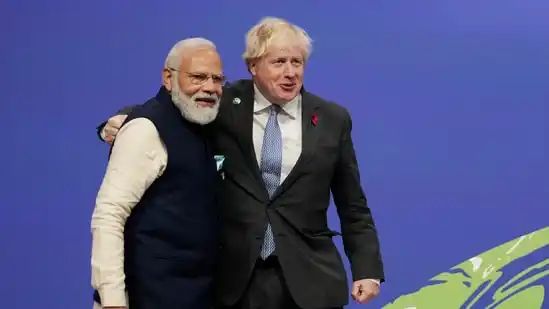 The prime minister of the United Kingdom Boris Johnson has accepted Prime Minister Narendra Modi’s invitation to come to visit India, foreign secretary Harsh Vardhan Shringla said on Tuesday, adding that the British premier will visit to India as soon as the circumstances suitable.

Prime Minister Modi extended the invite to Boris Johnson on the sidelines of the COP26 climate summit on Monday, as both the leaders discussed ways to enhance bilateral cooperation in sectors like green hydrogen, renewables and clean technology, economy, and defence.

Notably, Boris Johnson was earlier scheduled to visit India as the chief guest of the Republic Day parade in January this year, but his visit was cancelled due to the coronavirus disease (Covid-19) pandemic. The meeting between Modi and Boris Johnson at the COP26 summit in Glasgow was the first in-person interaction between the two leaders ever since the British premier’s visit to India was cancelled twice.

The leaders talked about a host of subjects, including bilateral cooperation to mitigate climate change. It was during this interaction that Prime Minister Modi reiterated his desire to welcome Johnson in India soon, an official release stated. Within a day, foreign secretary Harsh Vardhan Shringla confirmed that the British prime minister has accepted the invite.

According to people familiar with the matter, the relatively short interaction focussed on exchanging views and taking stock of the bilateral relationship.

After rustication and beaten-up by Class teacher A boy committed suicide in U.P