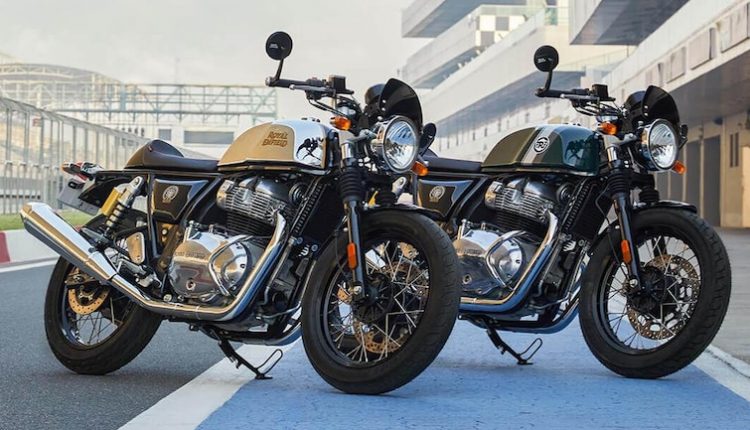 AZIR KHOBOR, December 8, Chennai: It was in November 1901 that Royal Enfield launched its first motorcycle at the Stanley Cycle Show in London, kickstarting the journey of an iconic brand which has since inspired millions in their pursuit of pure motorcycling over the last 120 years. From these humble beginnings in 1901, Royal Enfield, the oldest motorcycle brand in continuous production, has been a preserver of the legacy of building simple, fun and authentic motorcycles, to date.

To mark this milestone year, Royal Enfield, today unveiled the 120th Year Anniversary Edition of its popular 650 Twin motorcycles – the Interceptor INT 650 and the Continental GT 650 at EICMA 2021. Conceptualized and designed in celebration of Royal Enfield’s rich and storied legacy, the motorcycles present a unique opportunity for global enthusiasts to own a piece of motorcycling history with a limited production run of only 480 units, distributed as 120 units each for India, Europe, Americas and South-East Asia, comprising of 60 Continental GT 650 and 60 Interceptor INT 650 for each region.

Speaking on the launch, Siddhartha Lal, Managing Director of Eicher Motors Ltd. said, “Few brands can celebrate the kind of legacy and history that Royal Enfield has enjoyed over the last century and a lot of this legacy is from the immense love the brand has received from riders through the ages. There was simply no better way of celebrating this milestone than sharing a piece of it with our consumers around the world. We are delighted to bring the 120th Anniversary Edition 650 Twin motorcycles to enthusiasts around the world, and share the brand’s legacy with them. Both the Interceptor and the Continental GT are hugely successful around the world today, as they were in the 1960’s, and truly represent our heritage of making simple and enjoyable motorcycles”

The globally successful 650 Twin motorcycles – the Interceptor and the Continental GT – have received immense love from riding enthusiasts across the world and in the process have also raked in numerous, coveted global automotive awards. Inspired by the legendary Royal Enfield Interceptor 750 and Continental GT 250 of the 1960’s, these motorcycles have been instrumental in the brand’s global expansion and success over the last few years. The significance and relevance of the Interceptor INT and the Continental GT 650, both in Royal Enfield’s glorious past, and modern history, made them an obvious choice for the anniversary edition.

Given the milestone and exclusivity, the 120th Year anniversary edition Interceptor 650 and Continental GT 650 have been designed and handcrafted by the company’s teams across the UK and India.

The unique, rich black-chrome tank colour scheme, has been developed in-house, with Royal Enfield’s industry-leading chroming technology at the company’s original 1950’s manufacturing factory in Thiruvottiyur, Chennai – India. The motorcycles are chromed with an alternate, sustainable trivalent eco- friendly process.. To complement the black chrome tanks, both the Continental GT 650 and Interceptor 650 will feature, for the first time, completely blacked out components, with the engine, silencer and other elements in an array of black colour schemes. The motorcycles will also come equipped with a range of Genuine Motorcycle Accessories such as flyscreens, engine guards, heel guards, touring and bar end mirrors amongst others in a black disguise to compliment the overall design.

Proudly celebrating the brand’s handcrafted DNA, the 120th Year Anniversary edition motorcycles will feature a very unique, handcrafted, die-cast brass tank badge. These exquisite looking brass badges have been made in collaboration with the ‘SirpiSenthil’ family who are multi-generational artisans from the temple town of Kumbakonam, Tamil Nadu, India. Particularly specialized in making the elegant brass effigies for the most revered temples in India for centuries, this is the first time that these artisans have collaborated with any automotive brand. 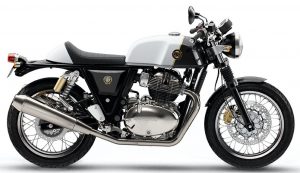 To make each motorcycle even more exclusive, the tank top badge will feature the unique serial number of each motorcycle indicating that it is 1 of 60 unique motorcycles in any of the four regions mentioned around the world. Additionally, the motorcycles will also adorn a side panel decal that is a special ode to Royal Enfield’s 120 years.

In India, the 120th Year Anniversary Edition Twins will be made available via a limited time online sale on December 6, 2021, on the brand’s website- www.royalenfield.com/120thedition. Consumers interested in owning one of these gorgeous motorcycles can register themselves, starting tomorrow, 24th November, on the website. The details for the sale process will be shared directly on the registered email addresses.

About the Royal Enfield 650 Twin Motorcycles

Launched in September 2018, the 650 Twins have been extremely well received by motorcycle enthusiasts in India and across the globe. The Interceptor 650 – a quintessential roadster, won several awards globally, including the prestigious Indian Motorcycle of the Year 2018 and has continued to dominate the upper end (500cc and above) of the mid-sized motorcycling segment in India. In the International markets as well, the Interceptor INT 650 has been extremely well received and has won several coveted honors including MCN’s (UK) Best Retro Motorcycle of the Year 2019 and 2020, becoming the only Indian brand to win the accolade twice in a row. It has also been the highest selling naked style motorcycle for calendar year 2020 in the UK (as per MCIA data from January 2020 – to December 2020) dominating the mid-sized segment for over a year and propelling Royal Enfield to become one of the fastest growing motorcycle brands in the country. The 650 Twins contribute significantly to Royal Enfield’s volumes in the Americas and the APAC region. 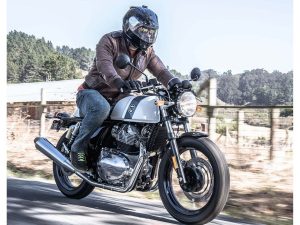 Royal Enfield’s premium line-up includes the all-new Classic 350, the Meteor 350 cruiser, Interceptor 650 and Continental GT 650 twins, the Himalayan adventure tourer, and the iconic Bullet 350 and Classic 350 singles. Riders and a passionate community are fostered with a rich profusion of events at a local, regional and international level. Most notable are Rider Mania, an annual gathering of thousands of Royal Enfield enthusiasts in Goa, and Himalayan Odyssey, a yearly pilgrimage over some of the toughest terrain and highest mountain passes.

A division of Eicher Motors Limited, Royal Enfield operates through 1033 large format dealerships and 1038 studio stores in all major cities and towns in India and exports to over 60 countries around the globe. The company’s two state-of-the-art production facilities are located at Oragadam and VallamVadagal, near Chennai. Royal Enfield recently invested in two world-class technical centers, in Bruntingthorpe, UK, and Chennai, India, and in 2020 opened its first assembly unit outside India, in Buenos Aires, Argentina. With more than 17% growth year-on-year for the last 5 years and sales in international markets up 96% in 2019-20, Royal Enfield is the leader in the global mid-size motorcycle market.