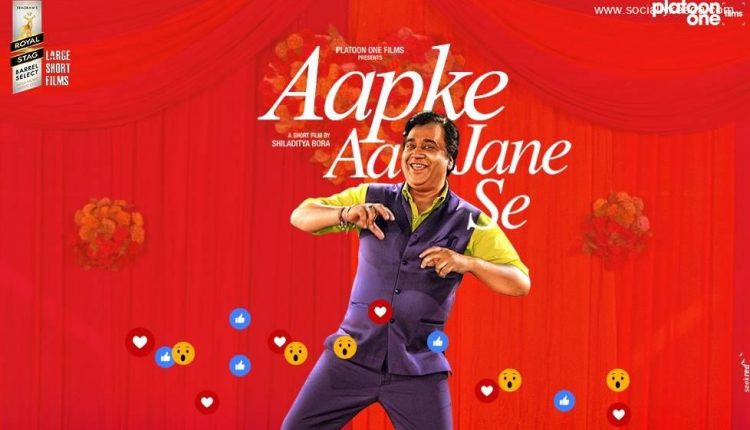 AZIR KHOBOR, New Delhi, December 24 : Royal Stag Barrel Select Large Short Films today premiered ‘Aapke aa Jaane Se’. The short film features critically acclaimed actor Manu Rishi Chadha who has been a part of
popular Bollywood cult movies like Oye Lucky! Lucky Oye and Shubh Mangal ZyadaSaavdhaan. The Shiladitya Bora directed movie revolves around the life of an under-appreciated, slightly emasculated father of two who is going through the general humdrum of middle-class Indian life. His life takes a
complete U-turn when he is unexpectedly thrust into the social media spotlight, making everyone around see him like never before.

Oblivious of the social media fever taking over everyone’s life around him, Manu Rishi Chaddha’s character grooves on a popular Bollywood classic by Govinda- &#39;Aapke Aa Jane Se&#39; in a family wedding which goes viral on the internet and turns him into an overnight internet sensation.Simple, yet fun-filled, Aapke aa Jaane Seis a perfect short film showcasing the unprecedented power of social media that can make a layman an overnight star.

Main Lead of the film Manu Rishi Chaddha says “I am grateful to Royal Stag Barrel Select Large Short Films for giving us a platform to share such unique stories and reach out to a contemporary audience base who will resonate with such narratives. I am excited to be a part of this movie as it’s about an
ordinary man with an extraordinary story. It feels like I have portrayed a part of me through this character. This movie is about self- discovery. Audiences, world-over have been able to relate at a personal level with the character, the milieu, and the film, wherever it has been screened across many prestigious film festivals globally.”

Talking about ‘Aapke aa jane se’, Shiladitya Bora says, “The storytelling of this movie is very simple yet compelling and touches upon a very important phenomena that we are witnessing in today’s time. The power of social media! It’s my first collaboration with Royal Stag Barrel Select’s Large Short Films and it is the perfect platform for narrating such stories of honesty and relatability, taking it to a larger wider audience base audience.”

The movie will be first exclusively premiered on Royal Stag Barrel Select’s Large Short Films website – www.thelargeshortfilms.com, a platform to watch the most original and inspiring short films made by some of the finest directors in India.