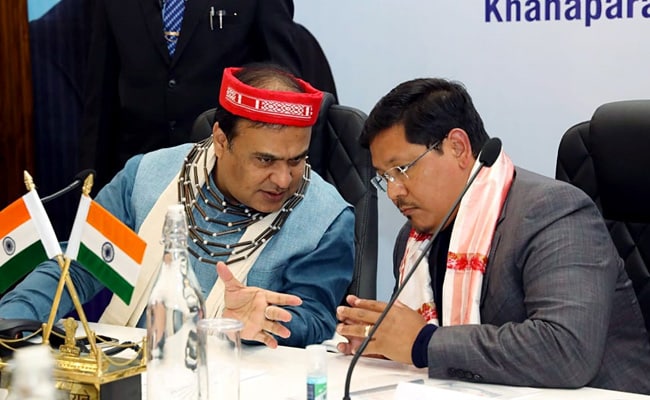 On the celebration of Meghalaya 50th statehood day: Both Assam and Meghalaya agreed to solve their decades old Border Disputes

One of the most talk about territory issues of North-eastern States of India, the decades-old border dispute between Assam and Meghalaya could be resolved using a formula of “give and take” between the two neighbouring states, people involved in ongoing negotiations have indicated.

On Tuesday, Chief Minister Himanta Biswa Sarma held talks with various political parties and organisations, including student bodies, of the state to apprise them about the progress made by the two states to sort out the border issue amicably.

Efforts are underway to finalise some deal soon, preferably before January 21, when Meghalaya celebrates its 50th statehood day. The CMs of both states are also expected to meet Union home minister Amit Shah on Friday at his residence to resolve the issue.

“Our efforts to resolve Assam-Meghalaya border row have started bearing fruits as 6 of the 12 areas of difference have been identified for resolution in the first phase. During an interaction, (I) briefed representatives of all political parties on the progress made so far,” Sarma tweeted on Tuesday.

The areas of difference taken up for final settlement are Hahim, Gizang, Tarabari, Boklapara, Khanapara-Pilingkata and Ratacherra. A roadmap for amicable settlement has been prepared based on recommendations of 3 regional committees with representatives from both the states,” he added.

Deliberations to end the border row have been taking place between the two states, including at chief ministers’ level, since last year and it was decided that in the first phase, six of the 12 disputed areas would be addressed. Recently, regional committees of both states submitted reports on these six areas.

While Sarma expressed confidence of an early solution, opposition parties in Assam, including the Congress, said that more discussion on a wider scale was needed to find a solution.

“During Tuesday’s meeting we were told that a give and take formula has been agreed upon by both states to sort the dispute in the 6 areas. As part of that Assam would get 18.51 sq km of area while Meghalaya would get 18.29 sq km,” said Md. Aminul Islam, organising secretary and legislator from All India United Democratic Front (AIUDF), who attended the Tuesday’s meeting.

“Border disputes between states can’t be sorted at chief-ministerial level. It should be done by the Centre. Meghalaya has been encroaching our land for years. Instead of a quick-fix solution, we want the issue to be discussed in the state assembly and a resolution adopted and forwarded to the Centre,” he added

Congress MLA and leader of opposition in the state assembly, Debabrata Saikia, also informed that both states have agreed on a “give and take” formula to sort out the dispute.

“We have not agreed to the proposal as this issue is needed to be discussed in detail in the state assembly. Since this is a serious matter, I urge the state government to convene an assembly session to discuss it,” he said.

President of Raijor Dal and Sivasagar MLA Akhil Gogoi, who missed the meeting after testing positive for Covid-19, issued a statement opposing handing over of Assam’s land to Meghalaya and urged CM Sarma to protect the state’s boundaries. “All states have boundaries decided by the constitution and CMs of two states can’t decide on realigning those borders through meetings. Any hasty decision taken on the issue could be detrimental to Assam’s interests. I urge the Assam CM take the people of the state into confidence before arriving at any solution,” Gogoi said in the statement.

Over 50% population under the age group of 15 to 18 teenagers have received their 1st dose of the Covid-19 vaccine: Health Minister says

Pakistan: Atleast 2 killed, 22 injured in the explosion at Lohari Gate area on Thursday