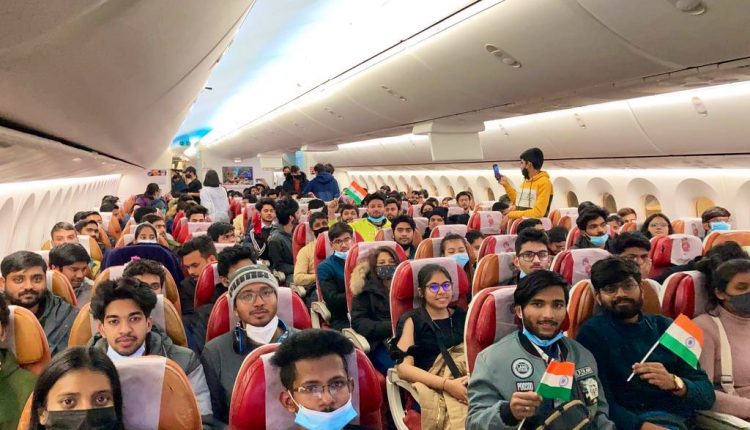 Civil Aviation Minister Jyotiraditya Scindia welcomed the evacuees at the airport by handing out roses to them.

Third flight of #OperationGanga with 240 Indian nationals has taken off from Budapest for Delhi.

Air India’s third evacuation flight, AI1940, which will depart from Hungarian capital Budapest, is also scheduled to return with evacuees to Delhi on Sunday, they said. External Affairs Minister S Jaishankar tweeted pictures of the third flight of ‘Operation Ganga’ with 240 Indian nationals arriving from Budapest

The Ukrainian airspace has been closed for civil aircraft operations since February 24 morning when the Russian military offensive began. Therefore, the Indian evacuation flights are operating out of Bucharest and Budapest.

Indian nationals who reached the Ukraine-Romania border and Ukraine-Hungary border were taken to Bucharest and Budapest, respectively, by road with the assistance of Indian government officials so that they could be evacuated in these Air India flights, the officials said. The government is not charging the rescued citizens for the evacuation flights, they said.

Air India shared on Twitter photos of Scindia receiving the evacuees at the airport. ‘Aviation Minister Jyotiraditya Scindia receiving the Indian nationals who were flown back to Delhi from Bucharest by AI 1942 on February 27 early morning, operated to evacuate Indians stranded at war-ravaged Ukraine,’ the airline said.

Foreign Secretary Harsh Vardhan Shringla had said on February 24 that around 16,000 Indians, mainly students, were stranded in Ukraine. The Indian Embassy in Ukraine said on Twitter on Saturday that Indian citizens in Ukraine should not move to any of the border posts without prior coordination with the Indian government officials there using the helpline numbers.

‘The situation at various border checkpoints is sensitive and the Embassy is working continuously with our Embassies in our neighbouring countries for coordinated evacuation of our citizens,’ it mentioned. The Indian Embassy in Ukraine said it is finding it increasingly difficult to help the crossing of those Indian nationals who are reaching border checkpoints without prior intimation.

It said that staying in western cities of Ukraine with access to water, food, accommodation and basic amenities is relatively safer and advisable compared to reaching border checkpoints without being fully abreast of the situation.

‘All those currently in the eastern sector are requested to continue to remain in their current places of residence until further instructions, maintain calm, and stay indoors or in shelters as much as possible, with whatever food, water and amenities available and remain patient,’ it said.

Why Russia attacks Ukraine? Check the Relevant reasons given below: