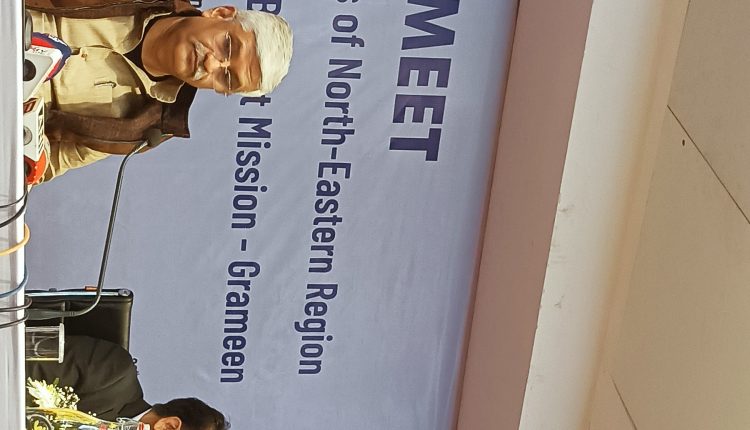 By Ranbir Hanse On Feb 28, 2022
Share FacebookTwitterWhatsAppEmailPrint
Guwahati, February 28: A one-day conference along with the State Ministers of North-Eastern Region in charge for Jal Jeevan Mission (JJM) and Swachh Bharat Mission – Grameen (SBMG) is organises on February 28-2022 at the Assam Administrative Staff College, Guwahati to focus on significant issues with regards to JJM & SBMG along with a review on the progress, current implementation and the way forward.
The inaugural session of the conference is presides over by the Hon’ble Union Minister, Jal Shakti, Shri Gajendra Singh Shekhawat. Secretary, Drinking Water & Sanitation, Ministry of Jal Shakti, Government of India, Ms. Vini Mahajan, along with other representatives from National Jal Jeevan Mission and Honourable State Ministers in charge of PHE from Arunachal Pradesh, Meghalaya and Assam, including Administrative Secretaries of the Department, Mission Directors, Chief Engineers and other Nodal Officers etc. from all the participating states participated in the conference. The proceedings of the conference was live-streamed and all PHED Engineers starting from JEs, AEs, AEEs, EEs, SEs, ACEs in all North-Eastern states joined virtually.
Shri. Syedain Abbasi, Addl. Chief Secretary, Government of Assam, delivered the welcome address highlighting landmarks achieved so far by Assam along with the determination to go ahead. He expressed hope that the conference will facilitate the scopes for learning through experience sharing and thereby formulate effective future course of action.
Ms. Mahajan, the Secretary, Drinking Water and Sanitation, Government of India, in her opening remarks outlined the aim and objective of the conference in the context of implementation of Jal Jeevan Mission and Swachh Bharat Mission – Grameen.
Honourable Union Minister Shri Gajendra Singh Shekhawat, in his inaugural speech reiterated the need of the timely implementation of the both the Missions with stress on priority sectors like long-term sustainability and operation of the schemes, skill development, active community participation, new technologies for sustainable service delivery, monitoring and effective grievance redressal mechanism.
In the first session of the conference, chaired by Hon’ble Minister Jal Shakti, the Additional Secretary cum Managing Director, NJJM, Shri Arun Baroka, IAS, initiated the discussion through a detailed presentation on the up-to-date implementation status under both the Missions in the North Eastern states. The Honourable Union Minister reviewed the status of implementation and progress of JJM & SBM(G) among the North-Eastern States and expressed concerns on certain specific aspects of implementation status. After the presentation, a detailed interaction took place with the participation of the Honourable Ministers of Arunachal Pradesh, Meghalaya, Assam and respective Departmental heads from the states. The interaction focused various issues related to the progresses made by the states. Shri. Shekhawat outlined the way forward for the Missions keeping in view the timely achievement of the goal under JJM and SBMG.
The afternoon session of the conference was chaired by the Secretary, DWS, Ministry of Jal Shakti, GoI and was joined by all the Secretaries & Senior Officers of NE States where discussions were held on “IoT based Monitoring to assure potable water supply to rural households” & “Grey water management in rural areas”. In the session, another presentation was made on Jal Shakti Abhiyan (JSA), a water conservation campaign of the Honourable Prime Minister’s impetus on Jal Sanchay. Moreover, in the session discussions on annual action plan for 2022-23 including intensive deliberation on State specific issues of the participating states were also held.
The participating states, agreed for scheduled coverage as mandated in JJM. The officials of Government of India present in the discussions urged one and all to focus all aspect of JJM, which is not just about providing a mere tap connection, rather a service to ensure safe drinking water supply at the required service level as one of the basic objectives, under Har Ghar Jal. The conference ended with a sector wise breakout session between the participating state to share their learning experiences.
Share FacebookTwitterWhatsAppEmailPrint

IOCL distributes prizes to their lucky draw winners at Bongaigaon