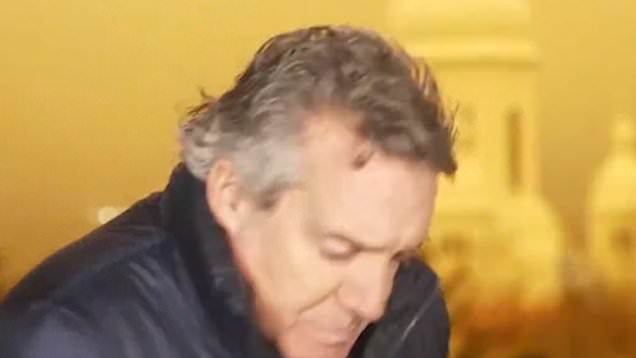 Ukraine: Huge explosions records in a camera while a journalist reporting live from Kyiv

Kyiv: In the back side of a journalist  two huge blasts were recorded as American journalists was reporting live from the war hit capital Kyiv.

CBS journalist, Charlie D’Agata, can be seen going off air and two huge explosions being recorded in the background.

“A third and fourth explosion has now been heard near Kyiv’s Druzhby Narodiv metro station. Air raid alerts in Kyiv. Residents must go immediately to the nearest shelter,” The Kyiv Independent reported.

The Ukraine media outlet also reported that Air raid alerts have been issued in Kyiv and Kyiv Oblast, Mykolaiv, Lviv, Zhytomyr and other areas.

Biggest blasts we've ever seen, just as we were coming off air tonight in #Kyiv #cbsnews @charliecbs @cbsnews pic.twitter.com/leIfTrdnXx

“The city is surrounded,” Kherson mayor Igor Kolykhaev said, according to The Kyiv independent, a Ukraine media outlet.

Russian forces launched military operations in Ukraine on February 24, three days after Moscow recognized Ukraine’s breakaway regions – Donetsk and Luhansk – as independent entities. Several countries including the UK, the US, Canada, and the European Union have condemned Russia’s military operations in Ukraine and imposed sanctions on Moscow. These countries have also promised Ukraine to help with defferent military aid to fight Russia which is despatched already from different countries.

The US, Canada and European allies agreed to remove key Russian banks from the interbank messaging system, SWIFT which means Russian banks won’t be able to communicate securely with banks beyond Russia’s borders. President Putin has also signed a decree on special economic measures against the US and its allies.