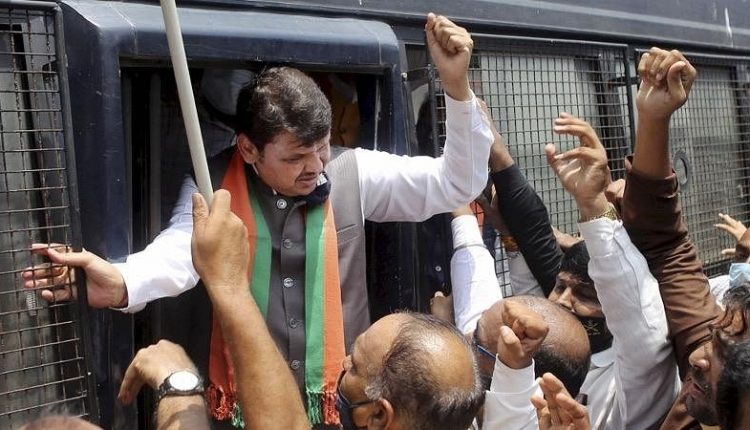 New Delhi: Former Maharashtra CM Devendra Fadnavis was detained by the Mumbai police on Wednesday. He was spotted waving the BJP flag from the police jeep in photos while being detained.

Other leaders were also detained by the Mumbai police along with Fadnavis for carrying out a protest march demanding Malik’s resignation. These include Pravin Darekar, Ashish Shelar, Girish Mahajan, Nitish Rane, Mangal Prabhat Lodha, and Niranjan Davkare

Fadnavis had been protesting in the past few days in the Maharashtra Legislative assembly demanding the resignation of NCP minister Nawab Malik who is currently in judicial custody till March 21 in relation to a money laundering case involving gangster Dawood Ibrahim.

Malik was arrested by the Enforcement Directorate on February 23 after hours-long interrogation. The ED case is based on an FIR by the National Investigation Agency (NIA). The ED has registered the case under the Unlawful Activities Prevention Act (UAPA).

Mumbai police detain BJP leader Devendra Fadnavis and other leaders of the party as they were carrying out a protest march demanding the resignation of state minister Nawab Malik #Maharashtra pic.twitter.com/EfEM3AytO7

The ED has been investigating the money laundering case for the past few months. In the same regard, it conducted multiple raids at Ibrahim and his aide’s hideouts.