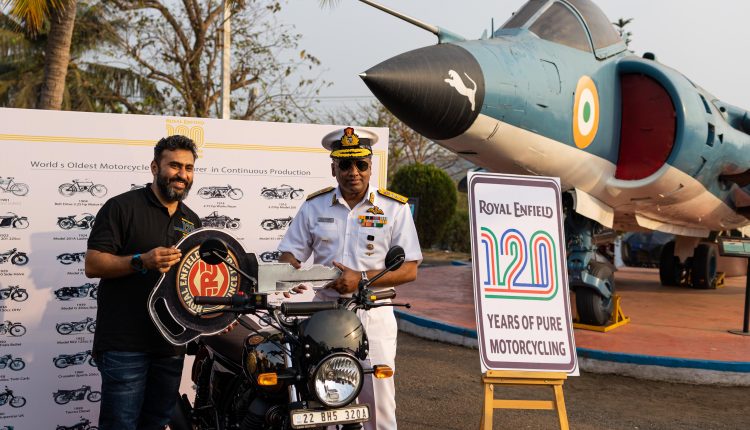 AZIR KHOBOR, Chennai, March 23, 2022: Royal Enfield commenced deliveries of the 120th year Anniversary Limited Edition 650 Twin motorcycles – the specially designed Interceptor 650 and Continental GT 650 – to customers in India. Unveiled at EICMA 2021, these motorcycles are conceptualized and designed in celebration of Royal Enfield’s rich and storied legacy of 120 years – Made Like A Gun Since 1901. A total of only 480 units were produced and distributed across four regions with 120 units each for India, Europe, Americas and South-East Asia, comprising 60 Continental GT 650s and 60 Interceptor INT 650s. Royal Enfield sold 120 units of these limited edition motorcycles through an online flash sale in India in the month of December last year.

The significance and relevance of the Interceptor and the Continental GT, both in Royal Enfield’s glorious past, and modern history, made them an obvious choice for the anniversary edition. Over the last few years, the 650 Twin motorcycles have been instrumental in cementing the growth of Royal Enfield in global markets.

Designed and handcrafted by the company’s teams in the UK and in India, these limited edition Twin motorcycles proudly depict elements that are unique to Royal Enfield and its legacy. Both these motorcycles come with a unique black-chrome colour scheme, complemented by blacked-out components with the engine, silencer and other elements in an array of black colour schemes. The motorcycles adorn a specially hand-crafted, very unique, die-cast badge on the fuel tank and also bear the legendary Royal Enfield hand-painted pinstripes. The motorcycles are equipped with a range of Genuine Motorcycle Accessories such as flyscreens, engine guards, heel guards, touring and bar end mirrors, amongst others, in a black disguise to complement the overall design. 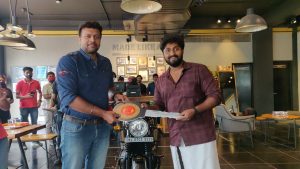 The online flash sale that went LIVE on December 6 last year, saw a very enthusiastic response from enthusiasts across the country with a whopping 17000+ registrations prior to the sale. From the biggest metro cities to the smallest towns, motorcycle lovers and Royal Enfield aficionados enrolled themselves for the online sale, wherein 120 units of these very special motorcycles were sold in under 120 seconds.

Rear Admiral of the Indian Navy, Philipose G Pynumootil, was among the first to book the Anniversary Edition Interceptor 650 in December last year. Recipient of the gallantry award – Nao Sena Medal – during his tenure in command of INS Brahmaputra, the flag officer has commanded the 1241 RE corvette, INS Nashak, the Missile Corvette INS Kirpan, among others, and has been a decorated officer of the Indian Navy, in addition to being an avid motorcyclist and travel enthusiast. He received his uniquely numbered ‘001’ Limited Edition Interceptor 650 on 16th March at a special ceremony at the Indian Naval Museum at Goa.

Ace shooter and Olympian Gagan Narang, took delivery of his limited anniversary edition Interceptor 650 in Hyderabad on 21st March. Air rifle Bronze medallist at the London Olympics in 2012, and recipient of the prestigious Arjuna Award for shooting, Gagan Narang has also achieved multiple World Cup Titles in his sporting career. When he is not practicing at the shooting range, Gagan loves riding motorcycles and the Royal Enfield 650 Twin has been his favourite.

Celebrated Malayalam film actor and director Dhyan Sreenivasan took delivery of his limited edition Interceptor 650 last week, at the company showroom in Kochi. Dhyan is passionate about motorcycling and loves to explore the world on two wheels.

Royal Enfield’s premium line-up includes the all-new Meteor 350 cruiser, Interceptor 650 and Continental GT 650 twins, the Himalayan adventure tourer, and the iconic Bullet 350 and Classic 350 singles. Riders and a passionate community are fostered with a rich profusion of events at a local, regional and international level. Most notable are Rider Mania, an annual gathering of thousands of Royal Enfield enthusiasts in Goa, and Himalayan Odyssey, a yearly pilgrimage over some of the toughest terrain and highest mountain passes.

A division of Eicher Motors Limited, Royal Enfield operates through 1033 large format dealerships and 1038 studio stores in all major cities and towns in India and exports to over 60 countries around the globe. The company’s two state-of-the-art production facilities are located at Oragadam and Vallam Vadagal, near Chennai. Royal Enfield recently invested in two world-class technical centres, in Bruntingthorpe, UK, and Chennai, India, and in 2020 opened its first assembly unit outside India, in Buenos Aires, Argentina. With more than 17% growth year-on-year for the last 5 years and sales in international markets up 96% in 2019-20, Royal Enfield is the leader in the global mid-size motorcycle market. 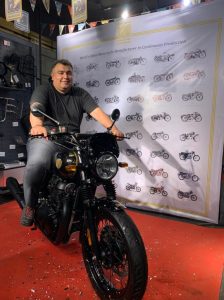