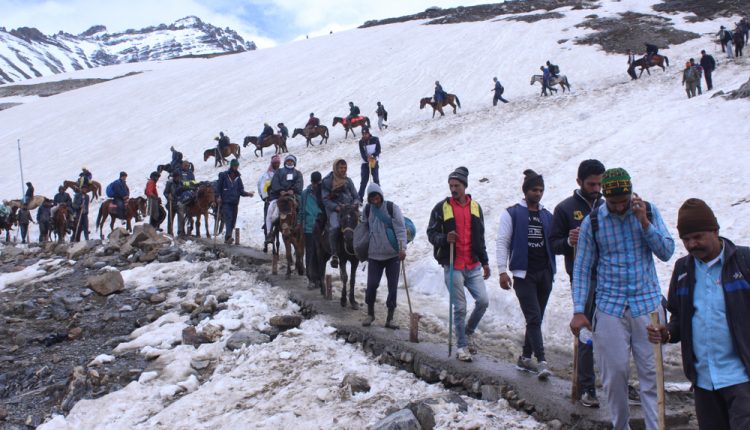 Amarnath Yatra: Registration to be start from April 11

MHA asked to Central agencies to give full security

Registration for the annual Amarnath Yatra, which was suspended for two years owing to the covid-19 pandemic, will begin on April 11. Nitishwar Kumar, CEO, Shri Amarnathji Shrine Board, said that the pilgrimage to the Himalayan shrine of Amarnath will commence on June 30 and conclude on August 11, reported news agency ANI.

Amarnath Yatra 2022 will start on June 30 and will conclude on August 11. The registration will start on April 11. The pilgrims can also register online through the website and mobile app of the Shrine Board,” ANI quoted the board official as saying.

With a sustained decline in Covid cases and a gradual return to normalcy, the board is expecting more than three lakh pilgrims to the shrine this year.

“Registration for Yatra will start on April 11 in 446 Branches of Jammu and Kashmir Bank, PNB Bank, Yes Bank and 100 branches of SBI Bank across the country. We’re expecting more than three lakh pilgrims. In Ramban, a Yatri Niwas has been made which can accommodate 3000 pilgrims,” he stated.

Millions of devotees trek through the Himalayas to Shri Amarnathji Shrine in South Kashmir every year to pay obeisance to Lord Shiva believed to be present in the unique form of an ice Lingam. The yatra could not be held for the last two years due to the pandemic and was suspended a few days before its scheduled conclusion in 2019 when the Centre widraw Article 370 to revoke the special status of Jammu and Kashmir.

The Ministry of Home Affairs (MHA) has asked the Jammu and Kashmir Police, as well as the Central security agencies, to make a foolproof plan for the upcoming Amarnath Yatra which is set to begin on June 30, sources have said.

The Ministry has directed the deployment of more than 40,000 Central Reserve Police Force (CRPF) personnel and also other troopers from paramilitary forces, the sources further said.
Share FacebookTwitterWhatsAppEmailPrint

Killing through open encounters are being conducted in Assam