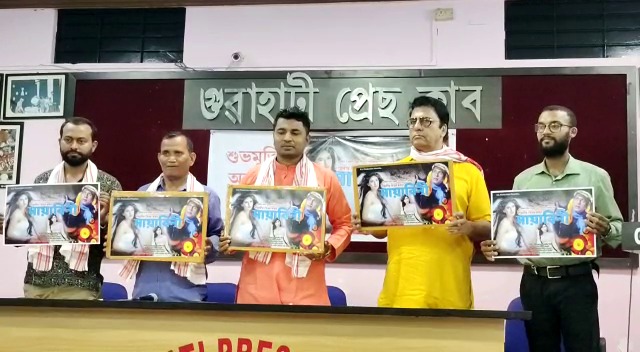 AZIR KHOBOR, Guwahati, April 21: Rajveer Singh, a well established music director in Bollywood and Punjabi music, officially released a song titled “Mayabini” produced in Assamese and Punjabi languages at Guwahati Press Club today. The Chief Guest at the event was eminent businessman and socio-cultural activist Utpal Baniya along with vice president of Guwahati Press Club Dhaniram Kalita, Artist Abhijit Sarma which was hosted by Journalist Hemanta Sarma. The song is produced by RS production and its music-lyrics and vocal by Rajveer Singh. Music arrangement by Sumit Acharya. Mix and Mastering by Vikas Baruah. In addition, the audio-visual song was acted by Rajveer Singh as well as Bollywood actress Hina Kumari. The song also stars many dancers from Assam and Mumbai. The choreography by Rajveer Singh. Cinematographer Souvik Sharma. Edited by Jeet Chaudhary. Noted that Rajveer Singh, basically a resident of Punjab and Mumbai was born in Assam. Rajveer was born when his parents came to Kalapahar in the city for business purposes. Rajveer has already attempted to take Bihu and Song to the international level by being attracted to the language & culture of Assam with respect and devotion to the homeland as he was born here. Rajveer Singh, who has sung and directed music on the international stage with artists like renowned Bollywood vocalists Guru Randhawa, Neha Kakkar is also associated with the event management of superstars like Salman Khan, Shahrukh Khan.