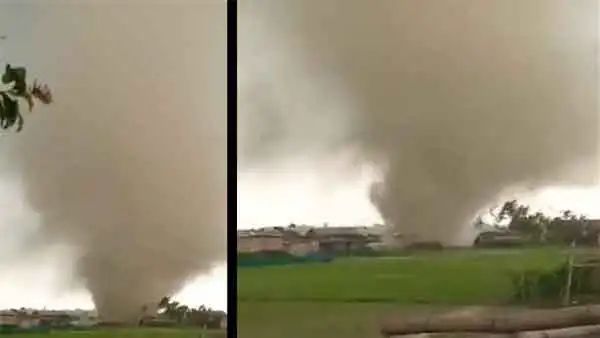 Guwahati, May 07: A rare tornado hit Assam’s Barpeta district ahead of Cyclone Asani on Saturday. Visuals captured by onlookers shows the clear swirling column of air carrying dust and debris.

A low-intensity tornado hit Chenga district in Assam’s Barpeta on Saturday. It is not a cyclone,” EastMojo quoted Sanjay O’Neill Shaw, Deputy Director-General of Meteorology at the Regional Meteorological Centre in Guwahati, as saying.

The tornadoes came as a surprise to the locals as it is quite rare in the region.

What is a tornado?

A tornado is a violently rotating column of air that is in contact with both the surface of the Earth and a cumulonimbus cloud or, in rare cases, the base of a cumulus cloud. It is often referred to as a twister, whirlwind or cyclone.

Tornadoes come in many shapes and sizes, and they are often visible in the form of a condensation funnel originating from the base of a cumulonimbus cloud, with a cloud of rotating debris and dust beneath it.

Usually tornadoes have wind speeds less than 180 km/h (110 mph), are about 80 m (250 feet) across, and travel several kilometers (a few miles) before dissipating.

In the eye of the Tornado.
This one is in Senga of Barpeta district of Assam. pic.twitter.com/KVJHgSe0h5

Tornadoes occur most frequently in North America (particularly in central and southeastern regions of the United States colloquially known as Tornado Alley; the US and Canada have by far the most tornadoes of any countries in the world).

The Tornadoes comes amid IMD’s forcasted that thunderstorms coupled with moderate to heavy rains over the next few days for the entire north-eastern region.