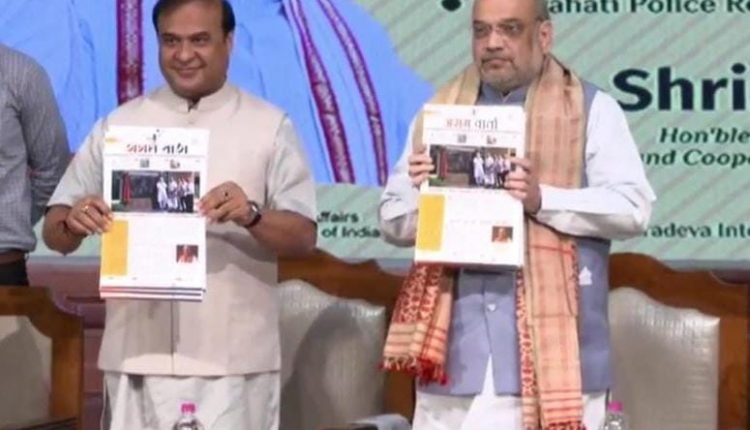 Azir khobor, Guwahati, May 10, 2022: Prime Minister Narendra Modi has been a great believer of participatory democracy. He has always stressed upon direct communication with the people in order to take the process of governance to the grassroots. Inspired by the vision of Honble Prime Minister, the Government of Assam has launched its own newsletter to directly engage with citizens and give people the opportunity to learn about the developmental journey of Assam.

The newsletter was launched by Union Home Minister Shri Amit Shah on May 10 at Srimanta Sankardev Kalakshetra in Guwahati, coinciding with the first anniversary of the present government. The newsletter will enable the people of Assam to stay connected to their government and its policies.

Titled Asom Barta (Voice of Assam), the newsletter, will update readers about the latest programmes and policies of the State Government. Citizens, intellectuals, and freelance journalists will have the opportunity to provide constructive suggestions to the Government of Assam through the newsletter.

The Government of Assam is committed to ensure widespread reach of Asom Barta. In the first phase, the target is to reach one crore readers via various modern technologies such as WhatsApp, Telegram, E-mail, SMS and with other social media platforms. Over 10,000 hard copies of Asom Barta will be printed and delivered on a periodic basis to all State Government offices at the district & block level and to eminent citizens across the country. Assam will be one of the first states in the country to launch its own newsletter and this is expected to bring a new benchmark in direct communication between the government and its citizens.

While functioning under the aegis of Directorate of Information and Public Relations (DIPR), Asom Barta will have its own governance structure operating with an Editorial Board consisting of Editor-in-Chief Shri Bishnu Kamal Bora, Director, DIPR, and four members in namely Shri Wasbir Hussain, Mrs Anuradha Sarma Pujari, Gurmail Singh, and Bijay Sankar Bora. Mrs Sikha Saikia, Sr Information Officer, DIPR, will be there as the member convenor. The Editorial Board shall curate relevant stories and opinion articles.

The first edition will be an anniversary special. It has 16 pages. Asom Barta will be printed in four languages – Assamese, English, and Hindi to start with, DIPR Director and Editor-in-Chief of the publication Mr Bora said, while adding that in due course it will be published in Bengali and other regional languages of Assam.

Asom Barta will report implementation of government schemes and effects of its policies at the grassroots while facilitating the people to stay connected to their legislators and government, he said.

We appeal to the people to subscribe to this publication free of cost by sending a WhatsApp message Assam at 8287912158 or by writing a mail to Asom Barta or filling up a form by visiting its website https://asombarta.com and sharing their mail id, the DIPR director said. He said that people can send their suggestions and grievances on the publications mail id or its interactive website for the government to take note.