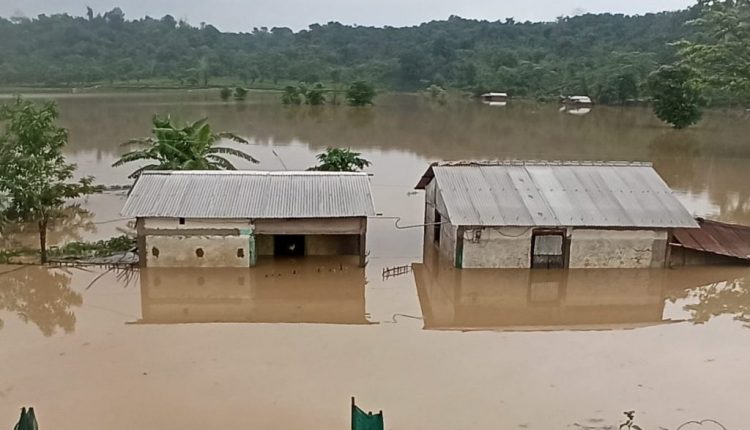 Guwahati (Assam) May 16: Around 57,000 people across seven districts of Assam have been affected by the current spell of flood in the northeastern state, according to an official statement.

The data also shows that nearly 222 villages under 15 revenue circles are affected in this wave of flood and around 10321.44 hectares of cultivated land has submerged in flood water. Three people including a child died during this natural calamity in Assam.
Apart from human beings, the flood has also affected 1,434 animals and a total of 202 houses have been damaged so far.
The Army, para-military forces, SDRF, Fire and Emergency Services carried out rescue and relief operations in flood-hit areas of the state. Several roads, bridges, and irrigation canals were damaged in Hojai, West Karbi Anglong, Lakhimpur and Nagaon districts.
Incessant rains triggered landslides in 12 villages parts of the Dima Hasao district on Saturday.
Massive landslides and waterlogging resulted in huge damages to the railway track, bridges, and road communications in this hilly terrain.
In view of incessant rain, landslides and waterlogging at several locations in the Lumding-Badarpur hill section of the Lumding division, Northeast Frontier Railway made changes in train services over the section due to this serious condition.
However, two trains got stranded, each with about 1400 passengers, NF Railway said in an official statement.
Railway initiated massive evacuation operations with the help of the Air Force, National Disaster Response Force (NDRF), Assam Rifles, and local people.
Around 1,245 railway passengers stranded at Ditokcherra station have been brought up to Badarpur and Silchar and 119 passengers have been airlifted by the Indian Air Force to Silchar, the Railway said in a statement.
The Railway while putting efforts into rescuing the stranded passengers is taking care of sanitation and ensuring medical facilities for every passenger. Food and drinking water have also been supplied to them.

Who is newly elected Chief Minister of Tripura’s Manik Saha?