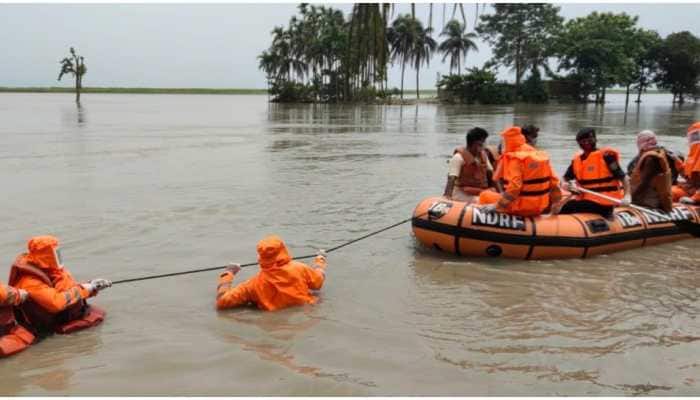 week after torrential rains started lashing the state, flood situation in Assam remained grim on Thursday with two more deaths taking the total to 11 since May 13 and the number of those affected rising to over 717,000.

According to a bulletin issued on Thursday evening by Assam State Disaster Management Authority (ASDMA), 1,790 villages in 75 revenue circles of 27 districts have been affected by floods.

Standing crop in nearly 64,000 hectares has also been affected.

Two deaths were reported on Thursday, both in Kampur in Nagaon district, taking the total deaths in one week to 11. According to ASDMA, 80,298 persons who have been displaced by floods are taking shelter in 167 relief camps in 14 of the affected districts.

Rescue efforts continued on Thursday with 7,229 persons evacuated by 130 boats in Cachar, Darrang, Hojai and Nagaon districts. Two helicopters were deployed by the Indian Air Force and they rescued 105 persons. IAF choppers were also used to drop food materials at Halflong, headquarters of the worst-affected Dima Hasao district, on Thursday.

Communication between the rest of the country with Barak Valley in Assam, Tripura, Mizoram and Manipur continued to remain disrupted as a result of damage to roads and train tracks because of heavy rain and landslides.

As part of an agreement signed between Flybig airlines and Assam government, special flights connecting Guwahati and Silchar, the headquarters of Cachar district in Barak Valley, started from Thursday.

As a special measure, price of tickets has been capped at ₹3,000 each, officials at Guwahati airport informed. The special flights will operate for 10 days.