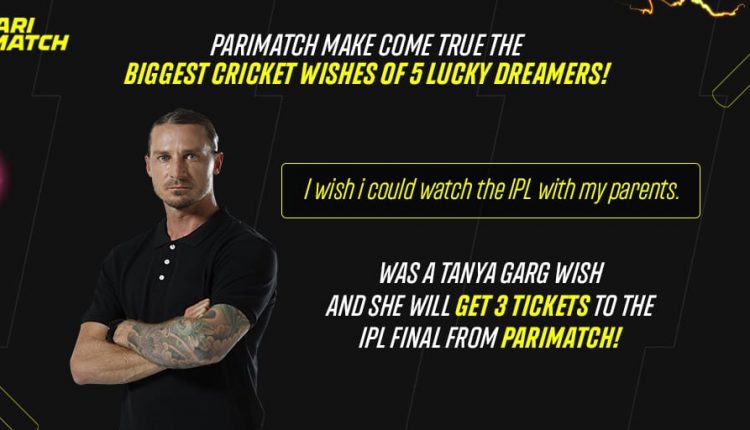 Azir khobor, New Delhi, 30thMay, 2022:  Online betting major Parimatch has made 5 winners of its BaaziSapno Ki contests happier, with the support of PMI – a service company engaged in the development and implementation of the expansion strategy for the brand. The most of winners will enjoy the IPL final in the stadium with their families and friends, and a future member of the Indian women’s cricket team will work on improving her skills with new professional equipment from Parimatch.

In March 2022, online betting major Parimatch launched the Baazi Sapno Ki contest for true sports lovers who can’t imagine their lives without cricket. Participants were called to stand a chance and share their biggest cricket dreams on a virtual billboard on the Parimatch website. Parimatch team committed to implementing 5 of them.

The winners of the contest were chosen by the legendary cricketer Dale Steyn.

“I want to lead a team like Virat Kohli”, “I want to hit 6 sixes in an over, so I need a new cool bat”, “I want to play professional cricket for Indian women’s cricket team”: Parimatch received tones of sincere wishes from cricket fans. As the contest was running during the Indian Premier League fever, most wishes were about visiting the final game of IPL in the stadium.

“I wish I could watch IPL with my parents”—that’s what I wrote on my virtual billboard. How surprised and happy I was when I got called from Parimatch! I won 3 tickets for the IPL final in Ahmedabad city on the 29 of May: for me, my mom, and dad. Now I have no doubt that Fortune loves me,” commented Tanya Garg, one of the 5 lucky winners.

Most Indians not only watch cricket matches, but they’re also great players. Some of them were lucky enough to win in BaaziSapno Ki contests, so now they are even more fired up to enhance our national teams in the future.

“My Biggest Dream is to play in the Indian women’s cricket team. I train hard almost every day and take any chance to step closer to my dream. I’m super happy that I got this gift from Parimatch. I’m double motivated now!” said Aditi, who’s won a professional cricket kit and 2 tickets for IPL Final.

The Parimatch team is also very excited about this contest and happy for the winners, especially because they didn’t just get “a great prize”—they got exactly what they wanted to get, which is much better.

Brand Parimatch proves that everything is possible—all you have to do is use your skills, always believe in your lucky star, and take all chances that life gives you. And then you will get your reward.

Parimatch is the world-leading betting company founded in 1994 which employs a digital-focused strategy to meet all the challenges of today”s reality. The company has come a long way and is continuously developing and improving the quality of its customer experience, which is enjoyed by over 2.6 million users across Africa, Asia, Europe, and Latin America.

Parimatch”s team of champions includes such stars as Conor McGregor, the living legend of boxing Mike Tyson and Dale Willem Steyn, one of the greatest bowlers of all time. It also includes partnerships with one of the most famous football leagues in the world, such as LaLiga, as well as with the biggest teams in the world: Chelsea, Juventus, Leicester City and Everton.

PMI is a service company, engaged in the development and implementation of the expansion strategy for the Parimatch brand in the markets of Africa, Asia, Europe, and Latin America. The company provides the tech, marketing, and communications services for partners in the betting industry. Innovations, new technologies, and the desire to provide the best gaming experience for the customers are what drives PMI forward.