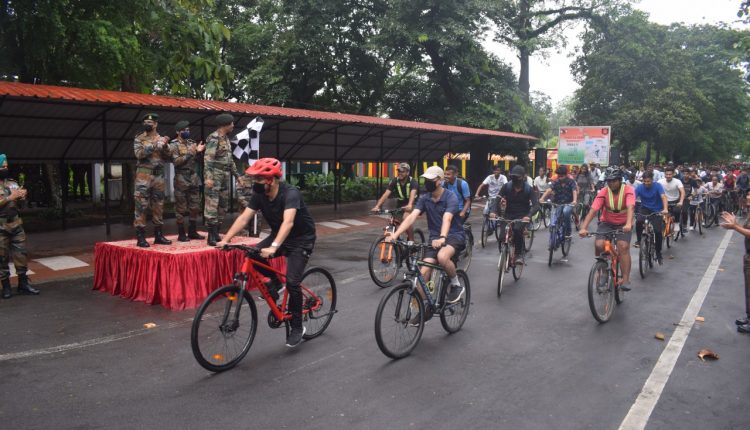 AZIR KHOBOR, TEZPUR, 5TH JUNE, 2022 : Blazing Sword Division under the aegis of Gajraj Corps organised Azadi Ka Amrit Mahotsav Mega event with active participation of the faculty and students of Darrang College, Tezpur on 05 June 2022. Students, civilians, NCC cadets and Ex-Servicemen witnessed the event. Azadi ka Amrit Mahotsav (AKAM) is an initiative of Government of India to celebrate and commemorate 75 years of independence and the glorious history of its people, culture and achievements. Prime Minister,Mr Narendra Modi quoted the following ,“The Azadi Ka Amrit Mahotsav means elixir of energy of independence, elixir of the inspiration of the warriors of freedom struggle, elixir of new ideas and pledges and elixir of Aatmanirbharta”. This Mahotsav is a festival of awakening of the nation, festival of fulfilling the dreams of good governance and the festival of global peace and development.

The event kicks started with a huge cyclathon in which more than 300 enthusiasts from all walks of life including senior Army officers participated. It was conducted with the aims of promoting awareness about the message of Azadi Ka Amrit Mahotsav, healthy lifestyle and requirement of keeping on environment and climate tree of pollution on the World Environment Day.

To coincide with the world Environment Day, tree plantation was carried out by the cyclists and college fraternity in the campus of Darrang College itself.

During the grand event, an impressive Know Your Army Mela which included weapons and equipments display, motivational stall and Join the Army Information Booth. The stalls were jam packed with a large member of visitors and it turnout to be main attraction of the entire event. Simultaneously the gallant Soldiers of the Indian Army performed a glittering combined Military Pipe Band Display belonging Dogra Regiment , Sikh Regiment and Jat Regiment with wide range of martial tunes. The Famous SIKH GHATKA dating back to the times of Shri Guru Hargobind Singh, was another display which the crowd of Tezpur has never witnessed before.

The Mega Event continued inside the College Auditorium, where the faculty and students of Darrang College, Tezpur participated with full gusto and performed various Assamese cultural and folk dances including BIHU and Sattriya and Majuli Dance Forms. In keeping up the theme of event, patriotic song were performed. 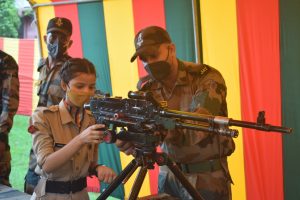 The NCC Cadets, who had turned out in large numbers in their smart turnout also presented a soul rousing NCC song. The final event which hold every ones breath was the BANGRA (PUNJABI) Dance preformed by the soldiers.

The event witnessed massive attendance and displayed animmaculate civil military cohesiveness. The event was widely appreciated by everyone who had come to witness the event. 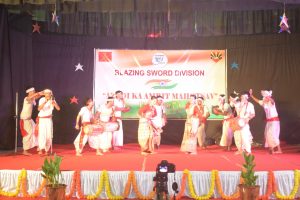