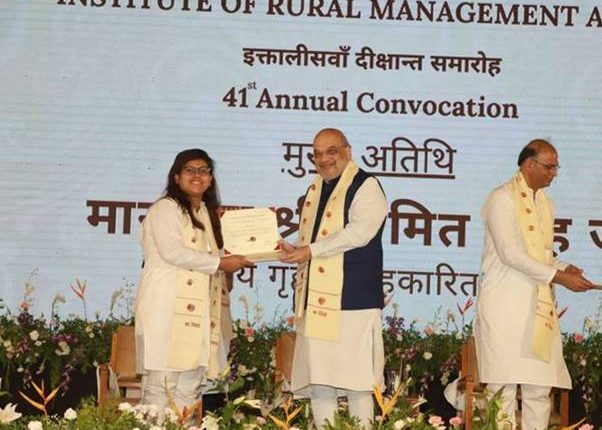 The Union Minister for Home and Cooperation, Amit Shah addressed the 41st Annual Convocation of the Institute of Rural Management Anand(IRMA) on the third day of his Gujarat visit today

Shri Amit Shah conferred degrees to graduating students and wished them the best for a bright future. He has said I am sure that after leaving IRMA, you may work in any field, but you will always be devoted to the idea and the resolve to work for rural development.

By Azir Khobor On Jun 13, 2022
Share FacebookTwitterWhatsAppEmailPrint
Rural development is not theoretical, it happens only whendevoted people immerse themselves in the work on hand and spread their efforts to villages across the country

The person who moves from ‘Self’ to ‘ For Others’ and thinks of others instead of himself, is wise

Today the graduates from this institutehave received good education, but spare a thought for those for whom good life, education, and for whom two meals a day is a dream

The Union Minister for Cooperation remembered Dr.VergheseKurien and said he established this institute to promote sustainable, situation-friendly, equitable and equitable socio-economic development amongst the rural people and that this objective should always be before you

The Prime Minister has provided connectivity to villages by providing money in the Budget to the Pradhan MantriGraminSadakYojana, due to which economic activity has started in villages

Villages did not have electricity, because of whichrural population used to migrate towards cities, but today the Government led by Shri NarendraModihas provided electricity to every village and due to this villages are also becoming self-reliant

Due to the priorities of the Prime Minister, the turnover of Khadi Village Industries has exceeded one Rs. 1 lakh crore

For the first time since Independence, Prime Minister, Shri NarendraModi has established the CooperationMinistry

Even today, 70 percent of our population lives in villages and due to lack of facilities, this population is unable to contribute to the development of the country, if we connect this 70 percent talent with the task of speeding up the economy, Shri NarendraModi’s dream of a US $ 5 trillion economy will be fulfilled in 5 years

To make cooperatives more inclusive, transparent, modern and technological and also to make individual and village self-reliant through cooperatives

The Union Minister for Home and Cooperation, Shri Amit Shah addressed the 41st Annual Convocation of the Institute of Rural Management Anand (IRMA) on the third day of his Gujarat visit today. 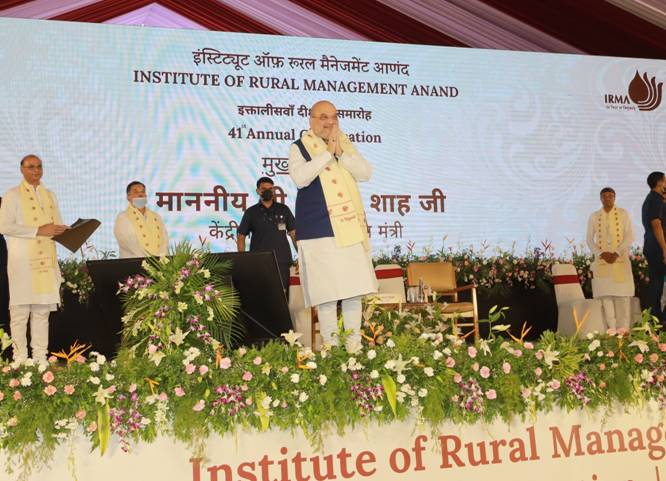 Shri Amit Shah said that rural development is not theoretical, it happens only when people devoted to it committedly work for villages. He said that if rural development is to be done in modern times, then its curriculum has to be suited to the times, it has to be formalized and according to the needs of today’s times, rural development will have to be converted and implemented on the ground. I believe that IRMA has taken it to the ground level in this holy land of Sardar Patel and Tribhuvan Bhai.

The Union Home Minister said that today 251 youth have been conferred degrees from here. He said that the person who moves from ‘Self’ to ‘ For Others’ and thinks of others in place of himself is the only one who has wisdom. Today those who have been conferred degreeswill be leaving after completing their education, but they must think of those for whom good life, education, and two meals a day is a dream. Shri Shah said that when you think in this way, you will experience self-satisfaction.  You will not get satisfaction even after earning crores of Rupees, but after making a person self-sufficient in your life, you will get self-satisfaction. Salvation comes only when there is contentment in life and satisfaction comes from working for others. The Union Cooperation Minister remembered Dr.VergheseKurien and said he established this institute to promote sustainable, situation-friendly, equitable and equitable socio-economic development among the rural people and this objective should always be before the graduating students.  Wherever you get something in life, you should also aim to give it back. Shri Shah said that Gandhiji had said that the soul of India resides in its villages. If India is to become prosperous, comfortable and self-reliant, then the village has to be made prosperous, comfortable and self-reliant and this was started in 2014 by Shri NarendraModii. It has happened since he become the Prime Minister. Shri NarendraModi placed a new vision for rural development before the Nation and the world. The village does not develop until the development of the individual takes place. Unless an area is developed, the village cannot develop. Only after development of the people, making their life convenient, development of the village and the area, the dream of rural development can be fulfilled. The government led by Shri NarendraModi has done much in 8 years for the development of the individual, the village and the region. There were 60 crore people who did not have a bank account and they were not connected with the economy. Today there is no family which does not have a bank account in the last 8 years. He said that there were many such families in Purvanchal where electricity had not reached even after 70 years of Independence. The task of providing electricity to every household was initiated by Prime Minister NarendraModi. Even minimum requirements like a toilet in every house was not fulfilled and NarendraModi started the campaign of cleanliness and today every house has a toilet. Arrangements have been made to supply fluoride-free pure water from taps in every house. The government led by Shri NarendraModi has provided cooking gas to every poor household. Along with this, the government led by Shri NarendraModi has provided health facilities up to Rs. 5 lakh to the 60 crore poor, by issuing health cards under the Pradhan MantriAyushman Bharat Yojana.To make life comfortable and to improve their standard of living, the government led by ShriNarendraModi has done much work. The Union Cooperation Minister said the second aspect of rural development is to provide conveniences to villages and the biggest work under this this was the Pradhan Mantri Gram SadakYojana, but if there is no connectivity with the Tehsil, then village development cannot take place. By providing a large amount to the Pradhan MantriGraminSadakYojana, connectivity has been provided to villages, due to which economic activities have started there. Villages were not provided electricity connects and due to this people from villages used to migrate towards cities, but today the government led by Shri NarendraModi has provided electricity to every village and because of which the village is also moving towards becoming self-reliant.

Shri Amit Shah said Khadi was forgotten after Gandhiji but due to the Prime Minister’s priority, the turnover of Khadi Village Industries has exceeded Rs. 1 lakh crore. There cannot be complete development of the village without making agriculture self-sufficient and Shri Modihas ensured that farmers do not have to take loans. 75 percent farmers own less than two acres of land and the basic cost of cultivating two acres of land is about Rs. six to seven thousand. Shri Modi has created a system by whichRs. 6,000 is disbursed annually to every farmer, so that the farmer does not need to take a loan. To make agriculture self-reliant, the farmer will increase his production, but cooperatives are the easiest way to domarketing. For the first time after Independence, Prime Minister, NarendraModi, has created the Cooperation Ministry. The Cooperation Ministry will play its role very well in the country’s rural development and rural development will take place at a rapid pace.

Shri Shah said that for regional development also, 100 such districts of the country have been identified in which development is lagging. The parameters include such metrics as number of illiterate persons, where the dropout ratio is high, where there is malnutrition, where people have less number of houses. Based on such parameters, a list of aspirational districts was made and the Government of India and State Governments started focusing on these districts. Due to the hard work of the government led by Prime MinisterNarendraModi equal opportunity has been provided for the development of all districts and they have been placed in the priority sector and today those districts are progressing through development. 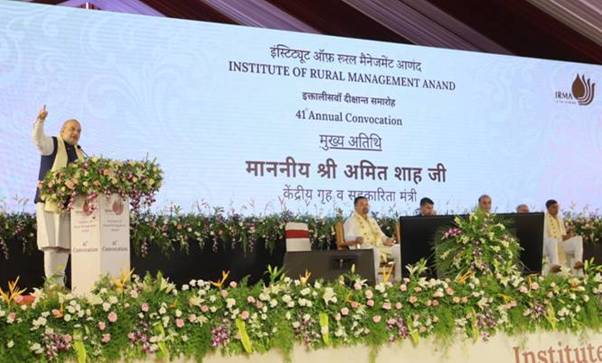 The Union Cooperation Minister said that a District Mineral Fund has been created, which provides a huge amount for the development of mining in a district. The government has started the scheme called CAMPA Fund, which will make districts green. The entire vision of rural development – development of the individual, the village and the region – has been implemented by the government led by ShriNarendraModi. Even today 70 percent of India lives in its villages and even today there are people who live in villages which are most in need of development. It is our responsibility to take away the darkness in the lives of our fellow citizens who have not received the chance of development.

Without rural development, the village cannot become a contributor to the national economy, and until this happens, 70 percent of the country’s talent will be  deprivedof the benefits of economic development. Only 30  percentof the population cannot contribute to speeding up economy development, because the load of the remaining 70 percent will stop that momentum .That is why if we connect 70 percentof the rural population with the task of speeding up the economy, then Shri NarendraModi’s dream of  a US $ 5 trillion economy will be fulfilled within five years. Development from bottom up is required to be taken up. Shri Modi has placed the vision of a self-reliant India before the Nation and the dream of a self-reliant India can be fulfilled only when the number of self-reliant villages increase. If the village has to be made self-reliant, that will only happen with rural development.

The Union Minister for Cooperation said that IRMA also needs to contribute more to promote the cooperative sector as thecooperationis inclusive. Cooperatives have to be made more inclusive, transparent, modern and technology-intensive and through cooperatives the individual and the village have to become self-reliant. All this can happen only when institutions like IRMA will increase their contribution. He said education is such a beautiful thing that no one can take it away from you, but if you forget the purpose of education, then you will take away your own education from yourself. If we remain strong towards its purpose, then we have to do our own development, but after that, the time which is left should be spent for the development of others. If there is time left after that too, that timeshould be spent for the development of the country, and that is when the beauty of education will increase further.

Shri Amit Shah said that former President of India, the Late Dr.Abdul Kalam had said that every person has a utility, and you can even get the best mind of this country only on the last bench of the class. That’s why no one needs to suffer with aninferiority complex, because a person is not big by birth but becomes big through thinking.