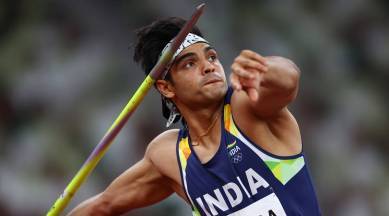 The javelin thrower won his first gold of the season

By Ranbir Hanse On Jun 18, 2022
Share FacebookTwitterWhatsAppEmailPrint
Neeraj Chopra has won his first gold medal of the season at the Kuortane Games with an 86.69m throw. The Indian javelin thrower hit the mark in his very first attempt at the event, had a foul in his second attempt and endured a nasty slip in his third, following which he opted to skip the remaining two attempts.
While Trinidad and Tobago’s Keshorn Walcott (86.64m) bagged a silver medal, Grenada’s Anderson Peters (84.75m) won bronze. Peters is also the reigning world champion and currently the season leader with 93.07m throw.

Keshorn Walcott, meanwhile, is the 2012 Olympic Champion and finished fourth in the javelin throw event in Turku, where Chopra finished second after setting a new national record (89.30m).

Another Indian in the competition, Sandeep Chaudhary finished eighth with the highest throw of 60.35m.

Chopra competed for the second time this week at the Kuortane Games, which is a silver-level event in the World Athletics Continental Tour.