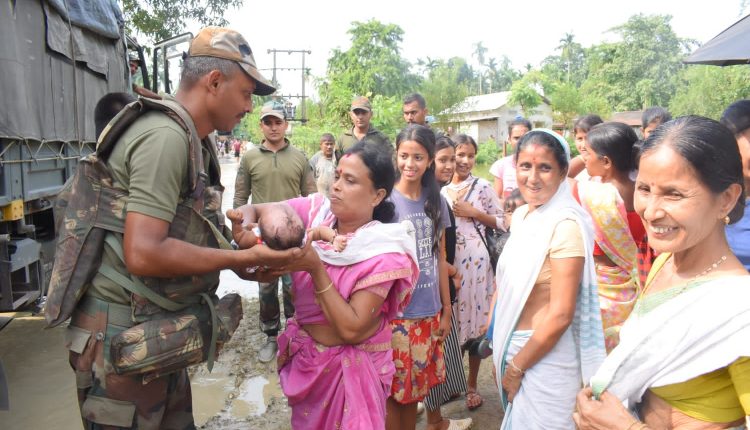 AZIR KHOBOR, GUWAHATI, 20TH JUNE, 2022 : Around 5300 people rescued since 16 June 2022. Maj emphasis was given to delivery of ration and other supplies in coordination with Civil Administration to relief camps.

Near Mangaldai in Darrang district, a pregnant lady was stranded in Kekrabadi village for more than 72 hours . One of the Rescue Column swiftly responded and conducted a tough and risky rescue operation and the pregnant lady was brought to safety. She was provided first aid and subsequently sent for advanced health care.

In Kamrup district, another Column treaded through deep and fast flowing waters and reached Bagta a village where at least 60 stranded locals were waiting to be rescued including ladies, old women and children. The most emotional moment was seeing a lady carry new born child and another pregnant lady waiting to be evacuated. Ambulance and doctors were called for at the base station and both ladies including new born were shifted to medical care.