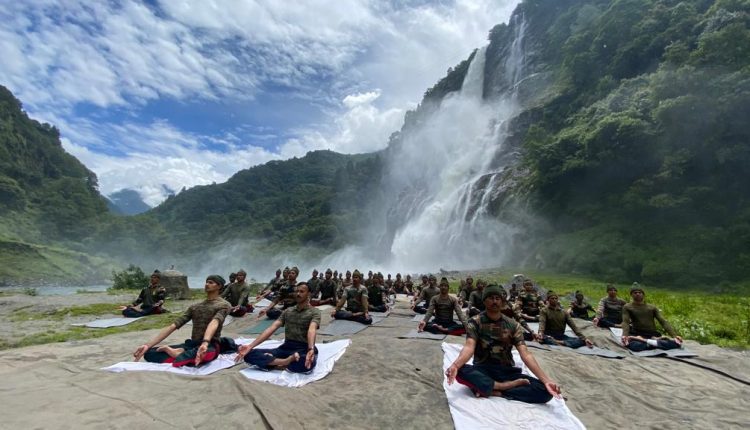 AZIR KHOBOR, TEZPUR, 21ST JUNE, 2022 : Indian Army personnel and families celebrated 8th edition of International Yoga Day to embark on the journey towards their trueself at Tezpur Military Station and other locations in Assam and Arunachal Pradesh including High Altitude Areas along LAC. At Tezpur, the celebrations were held at Army Public School Tezpur, in which Army personnel including Officers, Junior Commisioned Officers, other ranks and their families took part.

The event started at 06:40 AM in the morning with the address by Honourable Prime Minister Shri Narendra Modi. The address was followed by Central Yoga Protocol practice as promulgated by Ministry of Ayush. The Yoga session was conducted by Mrs Kakuli Hazra who is a renowned yoga instructor, registered with Ministry of Ayush.

The events saw active and enthusiastic participation of thousands of armed forces personnel and their families. It marked dissemination of Yoga for Humanity and importance of the supreme science of yoga among the ranks of Indian Army. Indian Army has been active in promoting the practice of Yoga through its various endeavours and it continues to uphold the age old sciences and traditions of Indian Culture, of which Yoga is an integral part.